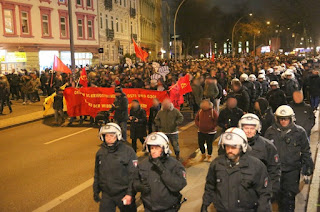 We document this translation of a report on the demonstration against the OSZE Summit in Hamburg on 8th of December.

On 8th and 9th of December the meeting of the foreign ministers of the “Organisation for Security and Cooperation in Europe“ (OSCE) took place in Hamburg. Therefore the repression apparatus of the FRG mobilised forces never seen before in this city. Over 13,000 cops, 22 water canons, 18 tanks, 35 boats, several thousand vehicles, K-9 units, mounted police, 10 helicopters and 700 police special forces occupied the “Exihibiton Halls” as the venue and the surrounding city district Sternschanze, St. Pauli and the whole city centre militarily and bullied residents and visitors. 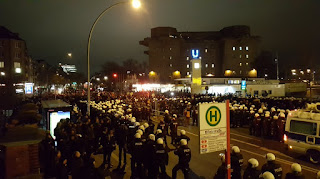 On this occasion the League Against Imperialist Aggression called for a demonstration with the slogan “Against the warmongers of OSCE and G20! Long live the resistance of the peoples!”, which could be read also on the banner at the front. Few days after the publishing of the date of the demonstration the propaganda machine of the ruling class gained momentum and began to denounce the demonstration and the League. The Hamburg local tabloid “Mopo” dedicated various articles to them which read amongst other things: “Hamburg can brace itself for riots! When on the 8th of December the two-day meeting of the OSCE foreign ministers takes place in the Hamburg Exhibition Halls, the radical “League Against Imperialist Aggression” wants to protest at the edge of the security zone at 6 p.m. - and for sure not only peacefully. […] According to the local domestic secret service the League is an association  “of groups, organisations, parties and individuals from various countries” which consider violence as “a legitimate mean for the enforcement of their political goals”. Their common base was “the anti-imperialist and internationalist struggle.””1
“Die Welt”2 went further and put the demonstration in context of support of alleged “terrorism”: “The anti-imperialist League is relevant known […] The League meets at the International Centre in Brigittenstraße 5, also known as B5. “The groups located there sympathise with terrorist and communist organisations from India, Peru and also the Kurdish autonomous regions””3.
The “Hamburger Abendblatt”4 principally did the same, but additionally attacked the applicant of the demonstration directly: “According to Abendblatt-Information the demonstration is announced by a long time affiliated of RAF-sympathisers” and added informations about his alleged residence.
5 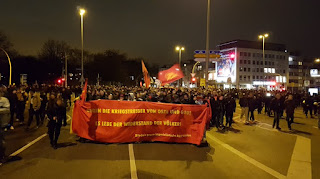 The local press also did not miss an opportunity to praise the military equipment and strength of the police. By that they tried to create a frightening climate and undermine the moral of the revolutionary and progressive movement in Hamburg and tried to intimidate it. 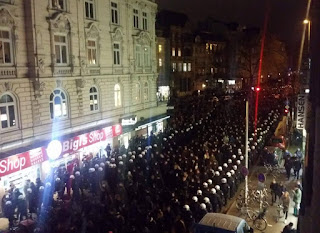 Besides this hate campaign before the demonstration and without a nationwide mobilisation at least 2,000 people gathered in the evening of 8th of December at subway station Feldstraße to protest against the visit of the warmongers and genocidaires and the attended occupation of the city. The police began to try to intimidate the protesters even before the demonstration started. With a parade of mounted police and police vehicles next to the protesters they tried to create a climate of intimidation. When the demonstration intended to start it was stopped by rushing police units. Allegedly a permission to start was not given. After the demonstration showed that those kind of attempts of intimidation would not work that day and showed its combatitive mood, the demonstration could continue its route. Confronted with a huge police force, surrounded by a police cordon and a helicopter in non-stop action the demonstration marched alongside the edge of the security zone. The “Comittee for basic rights and democracy” describes the situation as follows: “Also it needs to be reported about the totally oversized police platoon in context of a comparatively small demonstration of up to 2,000 demonstrators. New water canons, various special forces – BFE (arrest unit), USK (support unit)6, BeSi (evidence unit) – and an enormous army of highly equipped police officers accompanied the demonstration. The impression of a police-state-like demonstration of power comes into mind.”7 This estimation is confirmed by the reports of the bourgeois media. They report that “at short notice two additional platoons of riot police were deployed very closely on both sides of the protest march […]. Every participant had his own personal officer aside, in a manner of speaking.”8 This shows on one hand that the cops miscalculated regarding the mobilisation of the League and on the other hand it did not lower the determination of the protesters. 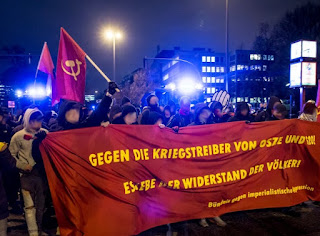 Different Migrant and German revolutionary organisations, a great number of revolutionary and Migrant youth and some residents participated at the demonstration. The warmongering of the OSCE-states and the seen increasing militarisation of the repression agencies were denounced in speeches. Additionally the assault and the following kidnapping of the Turkish revolutionary Musa Aşoğlu by reaction was condemned and his immediate release was demanded.
Besides the present attempts of intimidation before and during the demonstration it was clearly shown that the justified struggle of the peoples of the world against imperialism has its repercussion in the imperialist countries as well and has support in the belly of the beast. The demonstration marked that besides the massive hate campaign by the bourgeois press the combatitive people in Hamburg do not want and do not accept the division in “good and evil protesters”. It became obvious that the consequently anti-imperialist forces are not isolated.