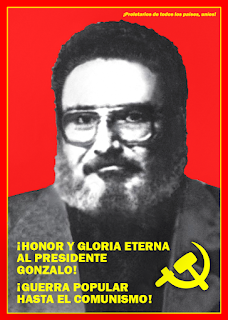 TRIBUNE OF THE PEOPLE: Joint international declaration by Communist parties and organizations in honor of Chairman Gonzalo

Editor’s Note: The following is a joint international declaration by Communist parties and organizations in honor of Chairman Gonzalo (Abimael Guzman Reynoso), leader of the Communist Party of Peru and Peruvian Revolution, who was assassinated by the reactionary Peruvian state, in service to US imperialism, on September 11. The statement was originally published on the Marxist-Leninist-Maoist newspaper, Communist International.

“As a materialist I know that life will end some day. What is most important to me is to be an optimist, with the conviction that others will continue the work to which I am committed, and will carry it forward until they reach our final goal, communism. Because the fear that I could have is that no one would carry on, but that fear disappears when one has faith in the masses. I think that the worst fear, in the end, is not to have faith in the masses, to believe that you’re indispensable, the centre of the world. I think that’s the worst fear and if you are forged by the Party, in proletarian ideology, in Maoism mainly, you understand that the masses are the makers of history, that the Party makes revolution, that the advance of history is certain, that revolution is the main trend, and then your fear vanishes. What remains is the satisfaction of contributing together with others to laying the foundation so that some day communism may shine and illuminate the entire Earth.“ – Chairman Gonzalo

On September 11th the vile assassination of Chairman Gonzalo was consummated. The black heralds of reaction claim that the man is dead and that he has already disappeared. But he is not, Chairman Gonzalo lives in the communists and revolutionaries of Peru, in the deepest bowels of the Peruvian proletariat and people; he lives in us, the communists and revolutionaries of the world, in the hearts and minds of the international proletariat and the peoples of the world. Chairman Gonzalo is not dead because he is more than a man, he is a path, a thought, a luminous path which millions follow with unshakable faith, raising the red flags of communism with the hammer and sickle at the top, iron legions of workers and peasants are forged under the leadership of the Communist Parties to storm the heaven. As Chairman Gonzalo himself said at the moment he became a prisoner of war: they came too late, their thoughts remain with the others. Chairman Gonzalo cannot be disappeared.

Chairman Gonzalo was an organic optimist, he had boundless confidence in the communists and the masses, and he forged us to be so. Thus, at this moment when we Marxist-Leninist-Maoists no longer have in flesh and blood among us the greatest of us all and we feel the deepest sorrow, we will not allow tears to cloud our eyes but our burning passion materialises into transformative power, fills us with energy and further strengthens our resolve never to lay down our arms until communism and to sweep with blood and fire with People’s War all oppression and exploitation from the face of the earth. Let the cowardly murderers know that the dreadful crime will not go unpunished, the people will do justice as only the people know how to do it and revolutionary justice may take time but it will come.

We all know who the murderers are, they are the executioners of the people, they are the imperialists, the reactionaries and the revisionists. They have names: Biden, Castillo and Miriam. It is Yankee imperialism that has directed the counter-revolutionary war in Peru, it is its nefarious CIA that has directed the psychological warfare, as a key part of its so-called “low intensity warfare”, against Chairman Gonzalo, the Communist Party of Peru (PCP) and the People’s War, and continues to do so. It has been the CIA, using its agents such as Montesinos and Merino, who have fabricated the hoaxes against Chairman Gonzalo and it is they who have directly directed the assassination; this is the direct responsibility of the highest representative of US imperialism, the genocidal war-monger Biden. The genocidal Armed Forces of the old Peruvian state, who with their bloody claws directly executed the assassination, as part of the genocide against the PCP and the Peruvian people. But, their insane hyena hatred could only have free passage under the political cover of the government of the rondero Castillo and his criminal gang of opportunists, of sell-outs and fascists of all stripes; only under the cover of a “leftist” government did the Armed Forces dare to carry out the crime that they did not dare to do under all the previous governments. It has been the rat Miriam, who is the head of the revisionist and capitulationist right-opportunist line, who from the first moment, has lent her “prestige” to give “credibility” to the hoax of the “peace agreement”; it has been she, who with her “phone call”, with the video montages, the “poems” and the “mamotretos”, who has made possible the damage that the reactionary operatives have caused to the PCP and the People’s War; that rat will go down in history as the most sinister arch-traitor; who, following the example of Lin Piao, iconised Chairman Gonzalo in order to overthrow and kill him, the most filthy revisionist who in vain tried to liquidate the Party and the People’s War and ended up with her hands stained with the sacred blood of Chairman Gonzalo.

Chairman Gonzalo defeated all the plans of the counter-revolution. At no time, when we could hear his voice, did he put forward anything other than his usual position: that the People’s War will inevitably win and that his arrest was only a bend in the long road of the Peruvian revolution to the conquest of power throughout the country. He transformed the concentration camp of the Callao Naval Base into the highest Shining Trench of Combat of the People’s War and, until his last moment, fought ceaselessly for the triumph of the People’s War as part of and in service of the proletarian world revolution, never betraying his condition by going down on his knees in absolute isolation. Therefore, there has never been and never will be any proof or basis for the absurd accusations against him; the “peace agreement” remained ashes in the wind, the “retreat of the world revolution” and “the fourth stage of the Party and Peruvian society” as well as all the rest of the revisionist barbarities, never came out of Chairman Gonzalo’s mind or mouth.

What remains for eternity is his theoretical and practical work in the service of the struggle for the true emancipation of humanity, for the struggle for communism. Although it is only in time that we will be able to appreciate the full importance of Chairman Gonzalo’s life and work, because this is always the case with historical figures of his stature, only a brief review of the facts allows us to see his gigantic role.

With a handful of communists, Chairman Gonzalo initiated the reconstitution of the PCP, cleansed the Party of revisionism and in a hard struggle for almost twenty years armed it as a war machine, putting it in a position to initiate the People’s War on May 17, 1980, culminating the reconstitution. The People’s War shook Peru, Latin America and the world; Chairman Gonzalo formed the revolutionary armed forces of the Peruvian people (today the People’s Liberation Army) and led the construction of the New Power (People’s Committees and Revolutionary Support Bases). Thus, he provided the Party, the class, with the main instrument of the revolution for the people and gave the broadest and deepest masses, mainly the poor peasantry, the possibility to exercise their power, to live their true democracy and to enjoy for the first time the fruits of their sweat and blood.

Very particularly, we stress that Chairman Gonzalo personally led the Marxist First Congress of the PCP, fulfilling the task left pending by Mariátegui, where the Basis of Party Unity of the PCP was established, which contains three elements: the ideology, Marxism-Leninism-Maoism, Gonzalo Thought, the Programme and the General Political Line with its centre the Military Line, where in the highest form is expressed Gonzalo Thought. This Basis of Party Unity is what today, more than ever, unites the communists of Peru; whoever does not fully and completely adhere to it is not a militant of the PCP. There has not been and will not be a party event of the PCP that denies the First Congress, on the contrary all the subsequent main events such as the three Plenums of the Central Committee of the PCP, have been guided and subject to the First Congress. It is the task of the Peruvian communists to solve all the pending problems of the revolution in the country by adhering to the Basis of Party Unity and applying it to the new conditions.

Since the death of Chairman Mao and the revisionist coup in China in 1976, Chairman Gonzalo has been the main protagonist of the red line within the International Communist Movement. Proving with the People’s War in Peru the universal validity of Maoism, he defined it as the third, new and higher stage of the ideology of the international proletariat and it was he who put forward for the first time the great truth that to be a Marxist today means to be a Marxist-Leninist-Maoist. By creatively applying the universal truth of Maoism, he has endowed the international proletariat with important contributions in the development of its theory and practice, the importance of which no one can deny – it is enough to see how with his profound understanding of the process of bureaucratic capitalism he has decisively armed us to dismantle all the revisionist machinations that seek to negate the democratic revolution in the oppressed countries, denying semi-feudalism in order to put forward a “socialist revolution” with “accumulation of forces” by legal means, to understand the full relevance of its contributions, to name just one example.

Today, when we strive for the holding of the Unified Maoist International Conference to make a decisive leap in the struggle for the reunification of the communists in the world and to realize a New International Organization of the Proletariat, we follow the example of Chairman Gonzalo who always fought for the unity of the communists and taught us, that in this complex process we must start from the common principles and agreements, based on them, to reach higher levels of unity in the midst of the class struggle and the two-line struggle.

There can be no doubt that the figure of Chairman Gonzalo is that of a giant of the international proletariat, his work is immortal and will live forever.

Today the communists of the world close the ranks around the PCP and honour Chairman Gonzalo by lending all our efforts to support the General Reorganisation of the Communist Party of Peru in order to give a great impulse to the development of the People’s War. We know that our comrades, as continuators of the revolution forged by Gonzalo, are struggling tenaciously to accomplish that task in the midst of the People’s War and we are fully convinced that the more they stick to what Chairman Gonzalo has established, the more rapidly they will solve the pending problems. It is our red flag that is flying in Peru and we defend it as such.

We raise our flags to the top. We stand at Attention raising our clenched fists. To the sound of the Internationale we pledge to follow the example of Chairman Gonzalo, to learn from him and that he will live in us forever.

THE PEOPLE’S WAR IN PERU WILL INEVITABLY WIN!

Red Fraction of the Communist Party of Chile

Committees for the foundation of the (Maoist) Communist Party of Austria

Committee for the Construction of the maoist Communist Party of Galicia 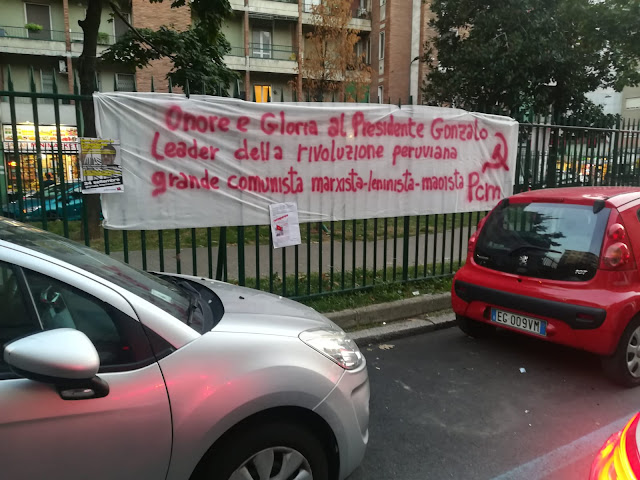 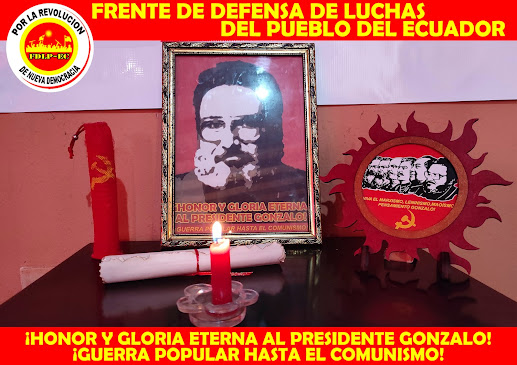 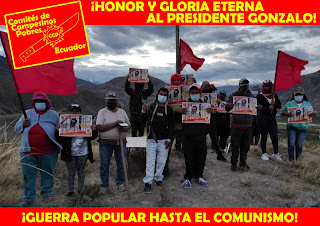 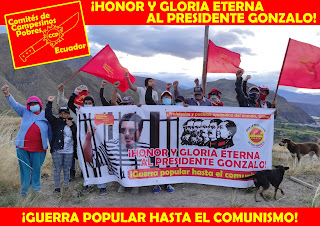 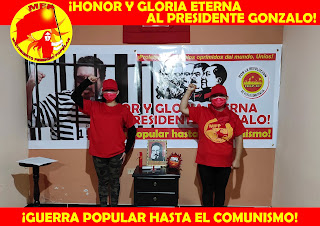 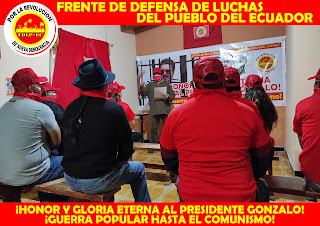 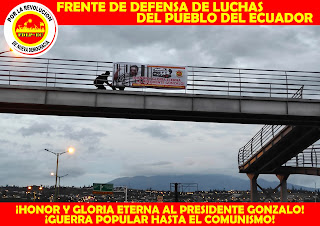 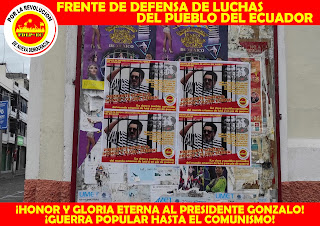 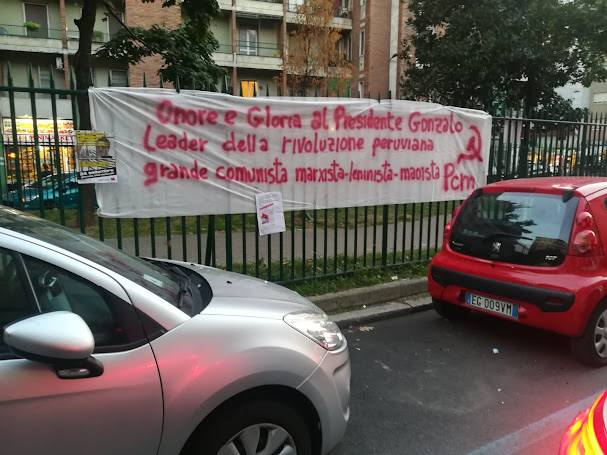 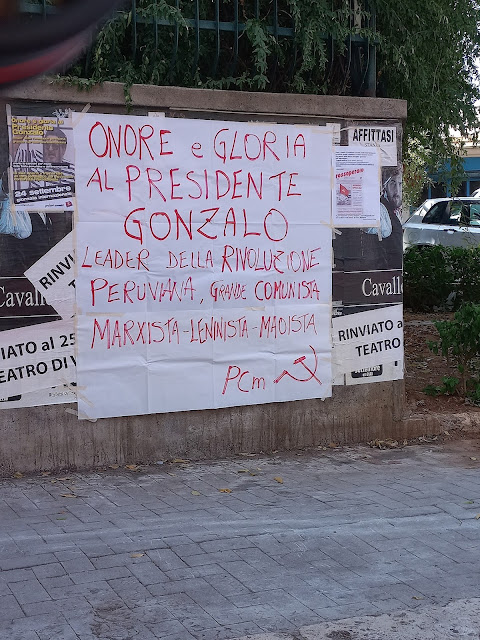 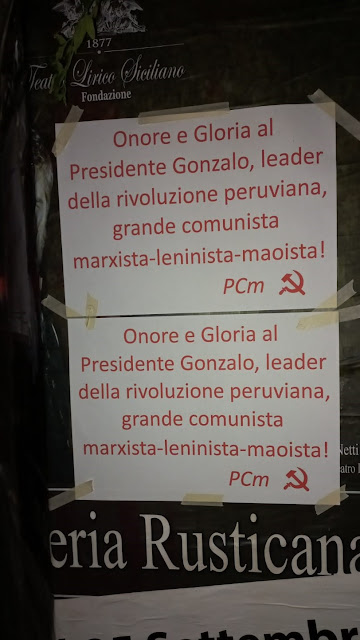 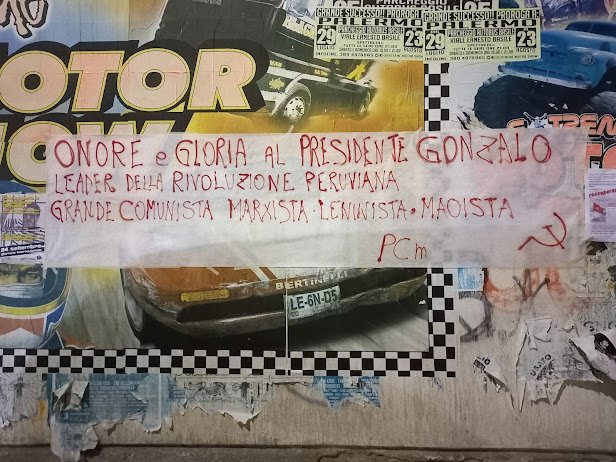