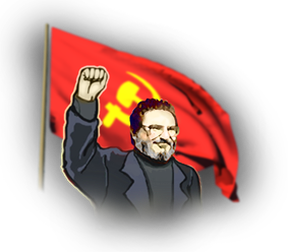 3rd DECEMBER OF 2018: LONG LIVE THE 84th ANNIVERSARY OF THE BIRTH OF CHAIRMAN GONZALO AND THE DAY OF THE PEOPLE’S LIBERATION ARMY!

We expresses, on this new anniversary, our greetings and unconditional subjection to Chairman Gonzalo, Great Leader of the Party and the Revolution, the greatest living Marxist-Leninist-Maoist on the face of earth, teacher of communists, continuer of Marx, Lenin and Chairman Mao Tse Tung, party unification centre and guarantee of triumph until communism.

Chairman Gonzalo is the one who reconstituted the Party, founded the PLA, initiated and developed the People’s War, defined Maoism as the new, third and superior stage of the ideology of the international proletariat, leads the Marxist-Leninist-Maoist, Gonzalo Thought revolutionary counter-offensive against the general counterrevolutionary offensive of Yankee imperialism as sole hegemonic superpower in collusion and contend with the Russian imperialist superpower (slim dog) and other imperialist powers, the world reaction and its servants of the old and new revisionism.

In the early 80s of the last century, Chairman Gonzalo and the  CPP have initiated the campaign to put Maoism as the sole command and guide of the World Revolution that develops in its stage of strategic offensive and of sweeping imperialism and the reaction away from the face of earth. Currently, a New Great Wave of the World Proletarian Revolution is being developed. Maoism is being imposed in the world, generating reconstituted Communist Parties as militarized Marxist-Leninist-Maoist Parties of a New Type to initiate and develop new People‘s Wars that, added to the ones that are already ongoing, will bring us to the World People’s War to sweep imperialism and the reaction away from the whole globe. Chairman Gonzalo and the CPP bring the military theory of the proletariat, People‘s War, into practice and defend the universality of it, which means, the necessity to apply it in all countries and in all kinds of revolutions according to its particularities.

The campaign for Maoism and the campaign for the defense of Chairman Gonzalo and his thought are strategically united and are inseparably carried out by the CPP and the maoist Communist Parties and organizations of the world.

The maoists of the world, by upholding, defending and applying Marxism-Leninism-Maoism with the contributions of universal validity of Gonzalo Thought, are reconstituting their Communist Parties and advancing in the task of reuniting the International Communist Movement. In advancig in this task, they are struggling for the realization of the Unified International Maoist Conference of maoist Parties and Organizations and to give birth to a New International Organization of the Proletariat, smashing the new revisionism that has blown apart the RIM.

Full of revolutionary optimism and with top morale for the successful development of the task of the General Reorganization of the Party (GRP), in the midst of the People‘s War and in life and death struggle with the new revisionism, both in the country and abroad, we celebrate this new anniversary of the birth of Chairman Gonzalo and the day of foundation of the PLA.

As it corresponds, we make this by carrying out further the boycott campaign against the reactionary sham of the “Referendum”, with which the fascist, genocide and motherland-selling government – headed by the pawn of Yankee imperialism Vizcarra – tries to legitimate itself and to further centralize the power in the executive, and the electoral sham of the second round to rearrange the reactionary authorities in the Regionals (part of the corporative restructuring that, amidst all kinds of failures, they try to carry on). All this, as part of the reactionary governments long term plan until 2021.

Finally, we greet the leaders of the CPP in the country that are assuming the task of the GRP and leading the heroic combatant, unwaveringly the PLA and the New Power, struggle to culminate the task and firmly hold on the path of revolution.

Long Live the 3rd of December, the anniversary of the birth of Chairman Gonzalo and the day of the PLA!

Communist Party of Peru (Reorganization Committee of the MPP)