We ( NewEpoch Media) document an call of the "Peru Peoples Movement" in English translation:


Proletarians of all countries, unite!

Before the next extraordinary parliamentary elections of January 26, 2020, convened by the fascist, genocidal and sell-out Government of Vizcarra to seek “legitimization”, based on what was established by Chairman Gonzalo and the PCP and the context in which they develop, we issue the following pronouncement:

“ON THE ELECTIONS. Marx pointed out: 'Every few years the oppressed are authorized to decide which members of the oppressor class will represent and crush them in parliament!' And that is even more true when the elections are to approve constitutions. Thus, elections are merely the method to renew the government administration of the dictatorship of the bourgeoisie in capitalist societies, and this happens even in the most democratic government we could imagine, and they are the usual means to preserve and develop capitalism.

In the landowning-bureaucratic States of Latin America, when elections have fulfilled their function of a changing of the guard, and at times during which the electoral norms of the bourgeois-democratic system are respected, election is just a tool of domination by the semi-feudal landowners and big capitalists, whether the renewal is done at standardized periods as lately in Colombia, or to end a period of military rule as also lately happened in Argentina, these are few examples of many in which our America is so prolific.

"The above can be demonstrated for this country. Although with important interruptions to the periodic electoral processes by military rulers -interruptions linked on the one hand to the development of the People's War and, on the other, to the contradictions between the landowners and the big bourgeoisie, and between the comprador bourgeoisie and the democratic bourgeoisie. Highlighting that the military governments themselves have been instrumental in implementing elections, be it to legalize its own situation, or to end its rule, or to guarantee them- elections in Peru have helped to preserve or develop the character of Peruvian State, the formal republic, the dictatorship of the semi-feudal landowners and the big bourgeoisie. Thus, elections have been, as couldn't be otherwise within the established social order, a tool first in the hands of the comprador bourgeoisie and then in the hands of the bureaucratic bourgeoisie. This has been the main characteristic in the electoral processes of the Peruvian State during this century, which has determined the class character of elections in this country.

"These fundamental matters establish the following:

The Peruvian State is landowning-bureaucratic, a dictatorship of a feudal landowners and big bourgeoisie, under ultimate control by Yankee imperialism; against whom the people struggle for the construction of a State of new democracy, which requires the destruction of the existing old order.
The Peruvian State, like every State, sustains, defends and develops itself by the use of violence, in the face of which the people need revolutionary violence, following the road of surrounding the cities from the countryside.

The elections are means of domination by the landowners and big bourgeoisie.

For the people they are neither instruments of transformation nor a means to overthrow the power of the current rulers. Therefore, the correct orientation is using them only as a means of agitation and propaganda."

Everything said by the Party in 1978 is fully valid. Now let's look at the particularity of the reactionary elections for the exchange of representatives to the reactionary parliament.

For January 26, the fascist, genocidal and sell-out Vizcarra has called “once again to the polls” in order to elect a Congress, that must be in operation until July 2021. This is the second time of an extraordinary call to vote because he, Vizcarra, decided to do so. The first was on December 9, 2018, for a referendum under the pretext of political reform in the absence of a parliamentary majority, seeking in this manner to legitimize his government out of a palatial coup d'etat with the support of the same aprofujimorist parliamentary majority.

Last September he dissolved the congress “in a de-facto manner” because he ‘interpreted’ that he had been denied confidence in his initiative regarding the replacement of the members of the Constitutional Court, when the parliamentary vote on this matter took place. As he was losing the election of the members of the Constitutional Court he ordered the police to shut down congress. It was a Coup d'etat that has allowed him to assume the executive and legislative powers, in addition to the full submission of the judicial branch and the department of public prosecution. Now, those Constitutional Court officials who have thus benefited from the extension of their mandate, are in the way of sacralizing the coup d'etat with “constitutional conformity”. And it could not be otherwise! And if, despite everything, it would be so, we are sure that the fascist Vizcarra with the endorsement of the genocidal armed forces, the support of the great media and the great puppeteer, Yankee imperialism, would ignore the verdict of “constitutional nonconformity” and would also shut down this Constitutional Court, possibly under the pretext of his “fight against corruption”.

A commentator of the reaction has summed up the nature of these parliamentary elections of January 26, 2020, as follows: “Regarding the new Congress, once this is elected, do you know when it is installed? Do those who aspire to integrate the new legislative have this clear? With all due respect: Do you have any idea when your functions as parliamentarians will start and when they will conclude?”

The reactionary farce is totally unmasked in its attempt to legitimize the shutdown measure of the reactionary parliament (the pigpen of the Plaza Bolívar) as well as the coup d'etat of Vizcarra and opens the possibility of a new mandate within the reactionary plan of the “Bicentennial”.

From 1980 to date, the reactionary elections pursue the so-called “legitimization” as a political objective of the counter-subversive war, in its form known as “low intensity warfare”, while the governments seek out elections as a means of “giving them legitimacy” and “authority” recognized by the people. Thus the elections are, therefore, an instrument of counterrevolutionary war.

Within this context and seeing the perspective, it is that we consider these parliamentary elections of January 26, 2020. And taking into account the experience of four decades, the voice of order is simple and concrete: Don’t Vote! Combat and Resist!


AGAINST HUNGER, INOCCUPATION AND THE CRISIS! FOR LAND, SALARY AND NATIONAL PRODUCTION!

AGAINST THE OLD STATE AND IMPERIALISM! FOR THE PEOPLE'S REPUBLIC OF PERU!

AGAINST THE SALE-OUT OF PERU! FOR THE DEFENSE OF THE HOMELAND!

AGAINST REPRESSION AND GENOCIDE! FOR THE RIGHTS OF THE PEOPLE AND THE PEOPLE'S WAR!

COMBAT AND CRUSH CRIME: THE THEFT,  THE PROSTITUTION, DRUG ADDICTION AND LAND TRAFFICKING!

DEATH TO THE THIEVES AND SNITCHES!

LONG LIVE CHAIRMAN GONZALO, LEADER OF THE PARTY AND THE REVOLUTION!

DEFEND THE LIFE AND HEALTH OF CHAIRMAN GONZALO, WITH PEOPLE'S WAR!

LONG LIVE THE GENERAL REORGANIZATION OF THE PARTY, IN THE MIDST OF THE PEOPLE'S WAR! 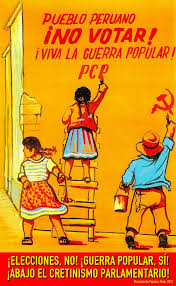