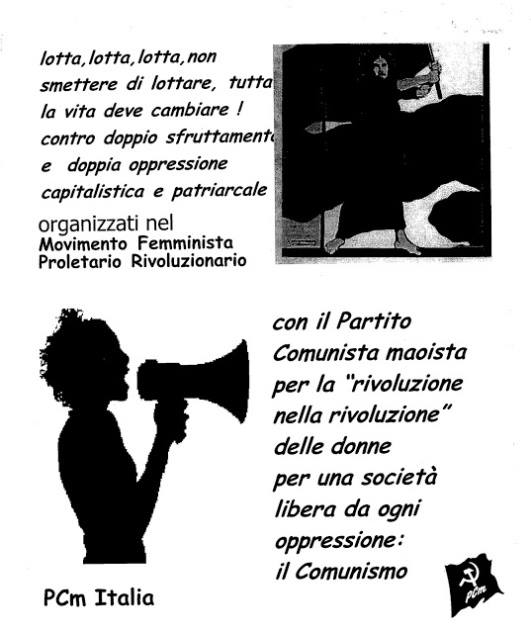 
From Italy throughout the world women grasp the weapon of women’s strike to fight this capitalist, imperialist, patriarchal society

The sparks of the women’s strike, lit in Italy over the last three years by the Feminist Revolutionary Proletarian Movement - PCm, this March 8 are turning into fire. In Italy, in many European countries, in the U.S. and in more than 40 countries around the world, in many countries oppressed by imperialism, hundreds of thousands of women join the strike.

The women’s strike today is the key weapon for the revolutionary march of women to "burn" at its roots this rotten capitalist, imperialist and patriarchal social system, source of any oppression and violence against the majority of women. Moreover, it is the strategic weapon of the proletarian women to bring their class and combative line, their autonomy from the bourgeois and petty bourgeois feminism, in the general struggle of women.
Proletarian women, workers women, the most oppressed and exploited women, the poorest ones, who are the majority in our country as well as worldwide, have not one but a thousand chains to break, and therefore they do not want to improve this bourgeois system of oppression, they do not accept it as inevitable or impassable, but struggle hard to overthrow it.

This strike comes against the most rotten fruit of this capitalist and imperialist society in decay, the sexual violence, the rapes and even femicides by the “men who hate women”, mainly perpetrated in the “sacred family”, but it extends to the struggle against the general, systemic war carried out by the masters, their governments, by the bourgeois states on the whole condition of women, with the deteriorating of their living conditions in the workplace and at home, discrimination, dismantling the rights won through great battles, such as abortion. And today more than ever each attack is accompanied by an open action of suppression of the struggles of women, those who still rebel, the immigrants women, the prostitutes, etc. A repression accompanied by racism, sexism, up to sexual harassment and rapes by security forces.
These attacks, in a phase of deep crisis of the dominant social system, every day feed a social, ideological humus of modern Middle Ages advancing in the imperialist countries, and also new forms of dark feudal oppression coils in the countries oppressed by imperialism. A climate of accelerate march toward a modern fascism which today concentrates in the most vulgar and dark face of Trump in the US.

The Women’s Strike, that in every way intertwines the struggle as women with the class struggle, is not only a practical but also cultural, ideological weapon for a transformation of the the social, workers movements of struggle, among the proletarians, within the revolutionary organizations themselves.

The revolutionary proletarian feminism, the March 8 and beyond, raises clearly the issue that we need a totally different society, a socialist society in which women are part of the proletarian power, towards communism, for a true liberation of women. This society is the result of the revolution, where the proletarian women are always a step ahead, in the front line of the general women's movement, to topple this bourgeois system.

Today, 50 years after the Great Cultural Revolution, in which millions of women have ''assaulted the heaven", and 100 years after the October Revolution, whose harbinger were the big protests of the women against the Tsar on 8th March 1917 – two milestones of humanity – this March 8 we reaffirm that women need to take in their hands the revolutionary struggle to transform heaven and earth, to destroy any practice and ideology of oppression. Women - in the words of Mao Tse-tung - “are half the sky, and they you must win it!”

Therefore, the March 8 we are close to the fighters women, the revolutionary communist women who are fighting in the people's wars and give their blood contribution to the new democratic revolution in the march towards socialism, that is crucial to achieve their emancipation and liberation. As well as we are close to women who, from Palestine to Rojava, play a role in the front line, even when not inspired by the revolutionary science of Marxism-Leninism-Maoism, fighting the reactionary regimes and reactionary forces, both at the service of imperialism, which try to crush them.

Particularly, we strongly support to the Indian comrades of CPI (Maoist), who in one of the largest countries in the world, in the heart of the contradiction between imperialism and the oppressed peoples, are making alive the strength of women all over the grounds, and give a contribution to all women in the world, as already happened in Peru and Nepal and as happens today in Turkey/Northern Kurdistan.