CPP(RC): The spark that lit the prairie on May 17, comrades, never went out 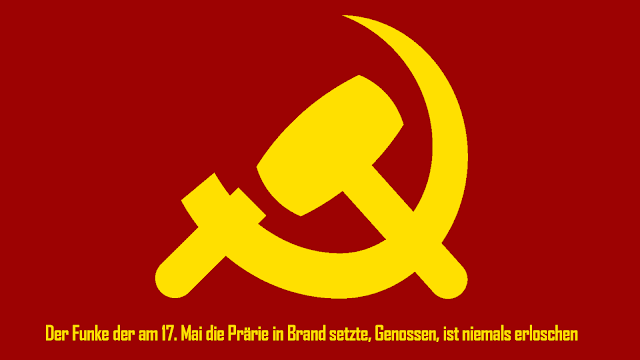 The 17th of May marked the 39th anniversary of the Initiation of the People's War in Peru. Apart from the publication of the Songs and Lyrics of the Songs of the Shining Trenches of Combat and a wall painting on this occassion, we are very happy to document now the (unofficial) English translations of the statement "La chispa que encendió la pradera un 17 de mayo, camaradas, no se apagó nunca" issued by the Communist Party of Peru (Reorganisationcommittee) yesterday.


Proletarians of all countries, unite!

The spark that lit the prairie on May 17, comrades, never went out


The spark that lit the prairie on May 17.

Those, who used to be companions along the road, and the pacifiers, they wanted and want to extinguish it, and not only that, but to scatter its ashes into the wind.

The visceral hatred of those who expired yesterday and those who are once again bankrupt.

The flame of intense fire, comrades, has never been extinguished.

The incandescent sun of its example still shines, unfading light that also imposes itself with a great roar in the ears of the people. It is the constant hammering of voices and of fists held high.

A fool whoever does not want to hear it. Don’t you see that the drums of war sound everywhere? It is no longer just here. Even worse for those who hear it, but divert towards another path.

The spark that ignited on May 17, flickers quickly in the field, in the potato, in the fruits, in the tunnels, in the rivers; flickers with more strength in all the corners of the countryside; echos like a resonating body in the city; more so, for it is like a child's voice: new and higher.

And the class demands its vanguard, its guide, in the role of its best children, who walk with the light raising banners of Maoism and Gonzalo Thought, contributions of universal validity before the eyes of the world […],

Comrades, the masses demand, call for, want, need clamor for People’s War until Communism and we can not be deaf and blind to it.

It is a crime to extinguish light and fire.

It is a duty to stir it up.

Let the sparks become bonfires and the fire purify us.

We raise the sickle with challenging stealth and with frightening hammers we wave our unbeaten red flag once again.

Long live the 39th anniversary of the People’s War!

Long live Chairman Gonzalo, great leader of the Party and the Revolution!

Honor and glory to the Peruvian proletarian and people!

Already, the Unified International Maoist Conference (CIMU) that has been convened by the Maoist Parties and Organizations is a resounding success, because the preparation – a process that is being followed and is an undeniable development in the reunification of the communists – is the greatest homage to the centenary of the foundation of the communist III. International by Lenin and the role fulfilled by comrade Stalin. It demands us to follow its example and raise higher the diffusion of communism in the world and the forging of the Communist Parties all over the globe – today, the Marxist-Leninist-Maoist, militarized Communist Parties.

Long live the Centenary of the communist III. International!

We are guided by our unbeaten flags of Marx, Lenin and Chairman Mao Tse-Tung. With our fists raised and our chests puffed we declare honor and glory to Marxism-Leninism-Maoism and we recognize the firm willingness of the Maoist Parties and Organizations to apply the contributions of universal character of Gonzalo Thought.