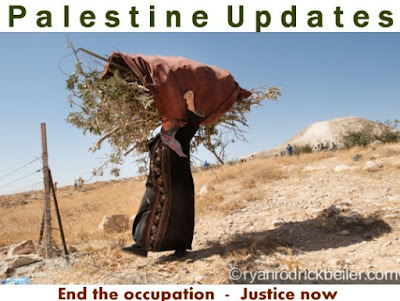 It is duplicitous for Germany to punish the Palestinian simply because it cannot cope with the fact that its people once committed unpardonable crimes on the Jews during the holocaust. Are Germany’s actions today merely a pretext to support a European presence in the Middle East in the guise of fighting anti-Semitism? Is there an unwritten pact between two peoples (European Jews and Germans) based on a common racial identity/orientation to suppress the just claims of the Palestinians? Isn’t the challenge to Germany one which gets them to cope with the holocaust while, at the same time, thwarting other forms of the holocaust including a non-stop ‘Nakba’ being carried out by the Zionists in Palestine?

Last week the German parliament condemned the BDS – boycott, divest and sanctions – movement for Palestinian rights as anti-Semitic. It said: “Resisting the BDS movement decisively – fighting anti-Semitism.” The motion brought forward by the Christian Democratic Union, the center-left Social Democratic Party, the Greens and the liberal Free Democrats showed quite a political consensus. Clearly, Germany is unable to come to grips with its guilt over Nazi crimes. It, therefore, punishes the Palestinians with an incurable political logic that borders on repeating injustice without having learned a single lesson from the past.

But progressives Germans have rejected this mainstream argumentation. They said: “We call on people of conscience in Germany and beyond to defend the sanctity of universal human rights and freedom of expression by protecting the right to BDS,” the BNC stated, reaffirming that “the academic and cultural boycott of Israel is strictly institutional and does not target individual Israelis.” They added:  “The equation of BDS with anti-Semitism has been promoted by Israel’s most right-wing government in history and, is, part of persistent efforts to delegitimize any discourse about Palestinian rights and any international solidarity with the Palestinians suffering from military occupation and severe discrimination.”

The EU, and individual governments, with rare exceptions, is unable to withstand the hounding of Zionist power coming, as it does, with powerful US backing. This applies also to large parts of the so-called two-thirds world. The seeds of mobilization for justice in Europe and elsewhere need to grow and emerge as an alternate force to the mainstream narrative. 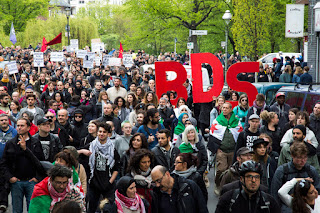 Activists in the 2017 May Day march in Berlin demonstrate support for
boycott, divestment and sanctions (BDS) movement for Palestinian rights.
Keren Manor ActiveStills

Inspired by the tactics of the anti-apartheid struggle in South Africa, the BDS movement was founded by some 170 Palestinian civil society organizations in 2005 with the aim of pressuring Israel to respect Palestinian rights and international law. It explicitly calls for Israel to end its occupation of Arab lands conquered during the 1967 war; abolish all discriminatory laws and policies against Palestinian citizens of Israel; and respect the rights of Palestinian refugees to return to their homes and properties as outlined in UN resolution 194. Support for the movement has grown increasingly over the past years, attracting high-profile individuals such as South African anti-apartheid veteran Archbishop Desmond Tutu.

Smeared as Nazis
The BDS movement is explicitly anti-racist and targets institutional support for Israel’s practices. Yet Friday’s motion claims without any basis that “the pattern of argument and methods of the BDS movement are anti-Semitic.” It compares calls not to buy Israeli goods to the Nazi slogan “Don’t buy from Jews.” It asserts that anyone who “questions the right of the Jewish and democratic state of Israel to exist or Israel’s right to defend itself will meet with our resolute resistance.” This means, in effect, that anyone who argues that Israeli Jews and Palestinians should have full and equal rights in a single democratic state – similar to post-apartheid South Africa – is deemed an anti-Semite.

Axel Müller, a member of Merkel’s party, told the Bundestag that “the right of the state of Israel to exist is and remains for us a principle of our state.” He claimed that “in social media, the BDS campaign unfortunately shows again and again that it is influenced by the propaganda of the Nazi dictatorship.”

Last month, the far-right Alternative for Germany (AfD) brought a separate motion calling for legislation ban the BDS movement outright, which failed. The Left Party brought its own motion calling for the condemnation of any anti-Semitism in calls for BDS, which also failed.

“Outright lies”
The nonbinding motion calls for the withholding of funding from organizations that call into question Israel’s “right to exist,” organizations that advocate for the boycott of Israeli goods and groups that show support for the BDS movement. The Palestinian Boycott Divestment and Sanctions National Committee (BNC) responded that “The German parliament’s equation of the nonviolent BDS movement for Palestinian rights with anti-Semitism is based on outright lies.”

“It’s not only anti-Palestinian McCarthyism, it is a betrayal. “We call on people of conscience in Germany and beyond to defend the sanctity of universal human rights and freedom of expression by protecting the right to BDS,” the BNC stated, reaffirming that “the academic and cultural boycott of Israel is strictly institutional and does not target individual Israelis.” More than 60 Jewish and Israeli academics critical of the move signed an open letter stating “we all reject the deceitful allegation that BDS as such is anti-Semitic.”

“The equation of BDS with anti-Semitism has been promoted by Israel’s most right-wing government in history,” the scholars add. “It is part of persistent efforts to delegitimize any discourse about Palestinian rights and any international solidarity with the Palestinians suffering from military occupation and severe discrimination.”

Israeli Prime Minister Benjamin Netanyahu welcomed the German parliament’s vote. But Netanyahu mischaracterized the nonbinding motion as “legislation” that forbids funding of the BDS movement. “I hope that this decision will bring about concrete steps and I call upon other countries to adopt similar legislation,” Netanyahu stated.

Berlin-based BDS activist Doris Ghannam told The Electronic Intifada, “it is nothing new that BDS is conflated with anti-Semitism, but to talk about BDS without mentioning Israel’s human rights violations – this is unbelievable.”

Activist Christoph Glanz, who won a two-year BDS court case against local authorities in Germany, told The Electronic Intifada that Israel lobbyists had “worked towards such a resolution for years…They knew very well that they would not be able to find a legal basis to outlaw BDS – the European Court of Human Rights would have thwarted this for good – that’s why the resolution is a mere resolution and not a law.”

Palestine Updates is a clearing house for historical and current information about happenings especially in the Palestinian territories, global campaigns, Israeli peace movement initiatives, and critiques of government policies in Israel and Palestine which hurt the people. It also conveys news from progressive Palestinian civil society groups, human rights organizations (local and international), and individual academics and writers.

We encourage readers of Palestine Updates to use our website (see www.palestineupdates.com) and subscribe to our twice-a-week newsletter “Palestine Updates”  sent to churches, justice-solidarity activists, NGOs, civil society and social movements, and interested individuals. The newsletter will include news/facts-analysis about how political decisions affect the prospects for a just peace.Those who wish to receive this must write to palestineupdates11@gmail.com