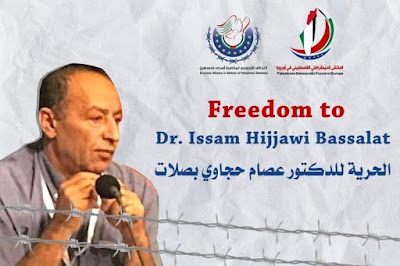 We, the undersigned community and civil society organizations in Britain, Europe and around the world, call upon you to act quickly to immediately release British citizen and Palestinian organizer, Dr. Issam Hijjawi Bassalat, from British detention in northern Ireland. We were shocked and taken aback by his arrest on 22 August 2020 by the British security services at London Heathrow Airport following his return from Dubai.

Dr. Issam Hijjawi Bassalat is a medical doctor, married and a father, and has been practicing medicine for many years in hospitals in Scotland, where he is a member of the British Medical Association. In addition, Issam is a prominent activist in the defense of Palestinian rights, and he works with many organizations and institutions active in solidarity with the Palestinian people in European countries, particularly the European Coordination of Committees and Associations for Palestine (ECCP), which brings together dozens of associations in support of the Palestinian people from 28 European countries.

Finally, Dr. Issam Hijjawi Bassalat, as part of his activities, communicates with many sympathetic political, trade union and social organizations in Britain, Europe, the Arab world and Latin America, with the aim of expanding the circle of international solidarity with the just cause of the Palestinian people. He frequently participates in conference and meetings in solidarity with Palestine, both in Europe and internationally.

Dr. Issam Hijjawi Bassalat is well-known for his commitment to freedom, equality, justice and human rights, and for his support for the oppressed peoples of the world. Since 16 September 2020, he and his nine detained comrades have been on a hunger strike. Not only has Issam been unfairly denied bail based on sensationalistic and exaggerated allegations, he has also been subjected repeatedly to isolation. This has been justified as a COVID-19 protection; however, other detainees at the same prison have not been re-isolated after returning from medical testing. This ongoing isolation appears to be punitive and targeted.

We urge you once more to immediately respond to the demands of the hunger strikers and to release Dr. Hijjawi Bassalat and his comrades. 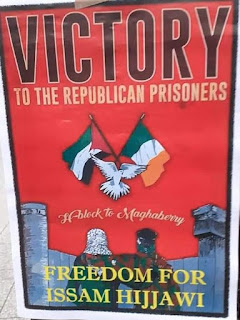