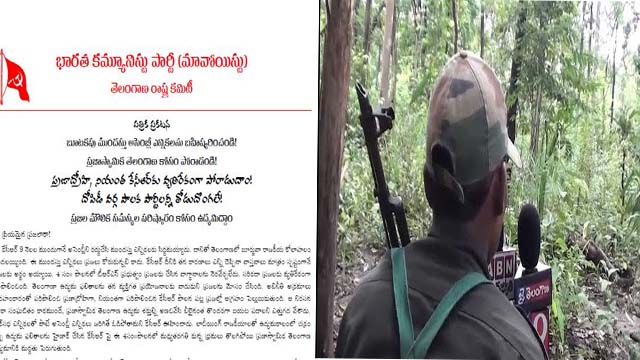 Maoist Party on Tuesday called for a boycott of the Telangana Assembly elections scheduled for December 7. In a statement sent to some media houses, Communist Party of India (Maoist) called upon people not to participate in what it termed ʹfakeʹ elections and fight for a "democratic Telangana".
Issued in the name of CPI-Maoistʹs Telangana State Secretary Haribhushan, the statement found fault with the policies pursued by all political parties.
Alleging that the ruling Telangana Rashtra Samithi (TRS) has not fulfilled promises made in the last Assembly elections, it said that since public resentment was growing. Chief Minister K. Chandrasekhar Rao went for early elections by dissolving the Assembly nine months before its term was to expire.
Haribhushan also slammed the Maha Kutami or Grand Alliance and the Bahujan Left Front (BLF). He said nothing could be achieved with the unity of the Congress and the Telugu Desam Party.
In the letter, the Maoist leader also said that he believed that parties like the CPI and the Telangana Jana Samithi joining hands with the Congress and the TDP in the name of Maha Kutami was tantamount to mobilising votes for bourgeoisie parties. The letter alleged that the Left parties have given up solving peopleʹs basic problems and the revolutionary movement to vie for positions of power.
The Maoist movement has considerably weakened in Telangana over the last decade. However, following the killing of a legislator and a former legislator in neighbouring Andhra Pradesh last month, security agencies have gone on high alert in Telangana.
Intelligence agencies have reportedly cautioned politicians in Telangana against possible strikes by the Maoists during the election campaign.
Telangana Director General of Police (DGP) Mahender Reddy and Hyderabad Commissioner Anjani Kumar along with several other senior police officials in the state have repeatedly urged Maoists to give up their arms and lead a normal life in society, assuring them that the state would provide help.