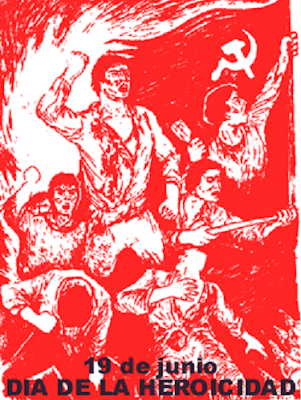 Proletarians of all countries, Unite!

LONG LIVE THE XXXIII ANNIVERSARY OF THE DAY OF HEROISM!
We, the Maoist Communist Parties and Organizations that sign this celebratory declaration, guided by our almighty ideology Marxism-Leninism-Maoism, principally Maoism, the ideology of the international proletariat, and hoisting the highest our red flags with hammers and sickles, with overflowing revolutionary joy and highest optimism, express:

Our solemn homage to the hundreds of communists, combatants and masses of the PCP, who, forged with the purest steel, in the image and likeness of Chairman Gonzalo, in the ardent forge of the People’s War in Peru, became prisoners of war and, with valor and courage that only the People’s War is able to generate, faced the most infamous genocide by the old bureaucratic-landlord state, a lackey of imperialism, principally Yankee. June 19 eternally marks the DAY OF HEROISM.

June 19, 1986, the reactionary, fascist and corporativist APRAist government headed by the genocidal Alan García unleashed the most shameless and sinister operation of annihilation. Mobilizing the Army, the Navy, the Air Force and the police force under the Joint Command the most infamous genocide was made – extinction as part of their counter-revolutionary war led against the thriving People’s War - by murdering hundreds of guerrilla fighters and children of the people, who were prisoners of war, bathing once again in the ardent blood of the best children of the people. Regarding Alan Garcia, his Ministry Council, the armed forces and police forces: They fell forever in inextinguishable dishonor that the people will not forget and will be punished only by them.

The combatants of the People’s War, the prisoners of war, by upholding that “Rebellion is Justified”, fought heroically and immeasurably, sealing a feat of heroism, valor and courage that history will keep them as exemplar demonstration of heroic men that only the People’s War is capable of generating. The shed blood does not drown revolution, it irrigates it!

Considering the variations that took place in the current situation, this is the proper occasion for us to reaffirm our position on the international situation and our tasks which has manifested in our latest declaration for the last 1st of May.

The international Situation is characterized by a great disorder under the heavens, imperialism can no longer escape its own law and provokes disorders everywhere and harvests only failure, and it will be like this until its final ruin.

This year, Yankee imperialism, sole hegemonic superpower and principal enemy of the peoples of the world, unleashed its aggression as “low intensity warfare” against the people of Venezuela to attempt to impose a puppet government headed by Guaidó, threatening to invade the country if its demands were not accepted. But the people of Venezuela, despite the vacillations and the line of commitment that the government of Maduro had with imperialism, have resisted and rejected the aggression, counting on the solidarity of the Latin American peoples and the peoples of the whole world that reject, among others, the imperialist aggression.

In the previous year, the government of Trump-Pence unilaterally decided to denounce the nuclear treaty with Iran and launched new threats and demands against Iran, reestablishing the regime of penalties from before the agreement.

These days, the genocidal arch-reactionary government of Trump-Pence announced a new initiative of “peace agreement” about Palestine, seconded by its lackeys in the Middle East like the Saudi Monarchy and the Zionist state of Israel, etc. Such initiative is nothing more than a new genocide sham against Iran, Palestine and all oppressed nations in this region. It aims towards legitimizing the colonial condition of Palestine and the apartheid regime imposed by the Zionist genocide state against the Palestine population, legitimizing the ethnic cleansing. It is an imperialist sham with the service of its lackeys - the bloodthirsty monarchies of the Gulf, headed by the Saudis - against the Palestine people as part of impulsing a front of aggression against Iran. Yankee imperialism continues with its war of aggression in the Expanded Middle East (EMA) now in the form of war between their “coalition” in the region and the “Shiite threat” and Iran seeking to recover the lost positions.

Yankee imperialism propels the policy of “maximum pressure” against their imperialist rivals and against the government of semi-colonial countries, seeking to raise higher their contradictions and increasing difficulties that they face, to succeed in imposing their will as sole hegemonic superpower. The government of Trump-Pence in the electoral situation where it develops is driven further for cheap triumphs. By applying the “hammer tactics” in their handling with Russian imperialism within the established policy of aiming against Iran, seeking to isolate it from Russia, has carried out a series of highest level meetings with representatives of the Putin government to deal about Venezuela, Ukraine, Iran and Syria, using them as “bargaining chips” and “attempting to ease the fire in a place to set it elsewhere”.

It is the repetition of the known game of superpowers and powers, of using the oppressed countries as “bargaining chips”. For now, this leads to a lowering of the pressure on Venezuela, but in the end all commitment under the imperialist gavel will be against the interests of the people of Venezuela, targeting all of Latin America, just as it now goes against the Iranian nation.

On its Southern border, the government of Trump exhibits its whole nudity in the subjection of the lackey government of López Obrador (Morena) to the anti-migration policy of the USA, which has even committed itself to deploy 6 thousand elements of the National Guard (created by the current government) to its border with Guatemala, so converting itself to be the migration frontier of the USA, to militarily detain the migration flow of the poor from the south, establishing the famous Trump wall on the south border of Mexico. All this was going on, because such military deployment is part of the development of the “New Structure for Defense of the USA”, in this case the North Command (USNORTHCOM).

However, according to the law of imperialism and all reactionaries, Yankee imperialism will only harvest new failures in Venezuela, Mexico and in the whole Latin America, in Iran and in Palestine or anywhere else and the resistance and combat of the peoples of Iran and Palestine will conquer new heights by impulsing the national liberation movement and the New Great Wave of the World Proletarian Revolution that is currently being developed in the world.

The peoples of the world also fulfill their law of struggle and fail, struggle and fail again and do so until the final victory. Revolution turned into the historical and political principal tendency today in the world and it is in uneven development of the revolutionary situation that extents to all countries and continents.

The oppressed nations show why they are the base of the World Proletarian Revolution and develop heroic armed resistance struggle and can count on the examples of the People’s Wars in Peru, India, Turkey and the Philippines. The advance of the People’s War in India to greater heights has strategic importance to tilt the balance in favor of the world revolution, not only because of its size, but because of the weight of the masses (more then a billion inhabitants) and its location in Asia. All this is an expression of the New Great Wave of the World Proletarian Revolution in the stage of strategic offensive, which will sweep away imperialism and the reaction from the face of earth.

Maoism generated militarized Marxist-Leninist-Maoist Communist Parties of a new type. By developing the process of reconstitution/constitution it goes on to lead this New Great Wave of the World Proletarian Revolution. This situation of development of the subjective factor puts us in best conditions to advance further in overcoming the dispersion of the International Communist Movement: to realize the Unified International Maoist Conference and give birth to the new international organization of the proletariat in it; in the path of the Communist International, which we will raise with the ongoing People’s Wars and the development of new People's Wars which are about to be initiated, with which we will change the current correlation of forces between revolution and counterrevolution in the international arena. This is why even those who are opposed to our initiative and are following the path of splitting cannot help but to acknowledge it, as they have done in their desperation by summoning a separate, factionalist and liquidationist conference.

These ones refuse to accept the undeniable victories in the path of struggle to overcome the dispersion in the International Communist Movement, the advances in coordinating and leading the struggles that the Communist Parties and Organizations carry out in the celebratory campaigns, in spreading and supporting the ongoing People’s Wars, etc. This is why we assume, as a whole and on each of its parts, the document of the Central Committee of the Communist Party of Brazil (Red Fraction): Combat Liquidationism and unite the ICM under Maoism and the People’s War – On the Criticism of the C(m)PA to the Joint Declaration for the 1st of May 2018.

Furthermore, just as it was highlighted by the PCP (RC), the Unified International Maoist Conference that was summoned by the Maoist Parties and Organizations is a categorical success due to the preparation, a process that still goes on and the undeniable development that it has in the reunification of the communists is in the highest level a celebratory homage of the first centenary of the foundation of the communist Third International by Lenin in march 1919 and the role fulfilled by comrade Stalin. It demands us to keep its example and to raise it higher in spreading communism in the whole world and to forge Communist Parties throughout the whole globe. Now, with militarized Marxist-Leninist-Maoist Communist Parties. Long live the centenary of the communist Third International! Honor and glory to Marxism-Leninism-Maoism and let us acknowledge the firm willingness of the Maoist Parties and Organizations on applying the contributions of universal validity of Gonzalo Thought.

Thus, we firmly unite with the celebration of the 30th anniversary of the 1st Congress of the PCP, unprecedented milestone of victory for the Peruvian and international proletariat, a Marxist Congress, Marxist-Leninist-Maoist, Gonzalo Thought Congress. We call on all Parties and Organizations of the International Communist Movement to carry out the celebration of this great unprecedented milestone of victory and to make the publications of the documents of the 1st Congress of the PCP; thus we greet the struggle of the comrades of the PCP for culminating the general reorganization of the Party led by its Reorganization Committee.

Finally we assume with highest communist spirit, what was established in the resolution of the CC of the PCP:

June 19 is forever marked as the DAY OF HEROISM; the blood of those heroes already result in further stoking the armed revolution, which rise as a monumental flying flag and unfailing war cry that calls for the inevitable final triumph.

The glorious belligerent death of these prisoners of war lives within the shed blood and we communists assume the commitment to follow its shining example, for, developing the People’s War, to serve the world revolution until the unfading light of communism rests upon the whole globe under the invincible flags of Marx, Lenin and Mao Tse-Tung, of the forever living Marxism-Leninism-Maoism.

LONG LIVE THE 30TH ANNIVERSARY OF THE 1ST CONGRESS OF THE PCP!

HONOR AND GLORY TO THE PERUVIAN PROLETARIAT AND PEOPLE!

Red Faction of the Communist Party of Chile

Maoist Organization for the Reconstitution of the Communist Party of Colombia

Revolutionary Nucleus for the Reconstitution of the Communist Party of Mexico

Committees for the Foundation of the (Maoist) Communist Party of Austria