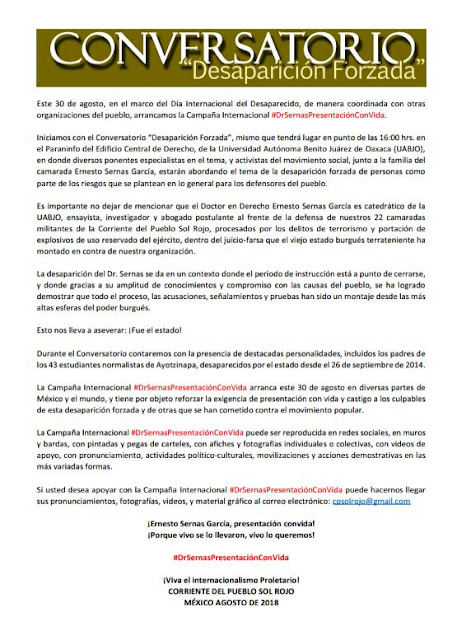 Call for the Lecture on August 30, all the material of international actions can be sent to cpsolrojo@gmail.com 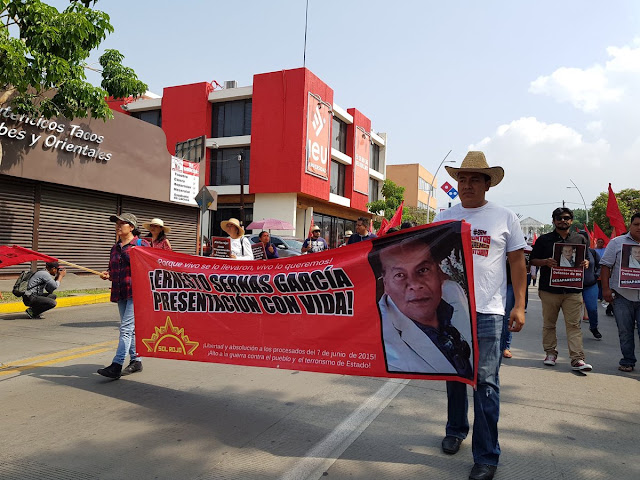 "We signatory organizations manifest, our indignation at the forced disappearance of the Doctor in Constitutional Law Ernesto Sernas García from the different geographies of the deep, conscious and progressive Mexico.
He is also a professor at the Benito Juarez Autonomous University of Oaxaca (UABJO) and has stood out for his critical thinking and commitment to social causes in service of the people. As a result, he was currently serving as a postulant lawyer in the legal defense of the comrades of the CURRENT OF THE PEOPLE RED SUN organization, who were arrested on June 7, 2015, accused of the crimes of terrorism and carrying explosives.
Within the strategy of legal defense in the mentioned proceedings, the defender was preparing evidence that would conclusively show the serious violations to the process and the rights of the accused, it was such relevant event before which the Working Group on Arbitrary Detentions of The UN-Mexico made a statement on this in its ‘Opinión 17/2016’, which, among other things, indicates that the accused were victims of arbitrary detention and torture by the Mexican state, that all of them were imprisoned for political reasons, demanding their release and unconditional absolution.
The procedural moment of mentioned proceeding and the specific role of the defender within it are crucial for the acquittal of the activists and, to demonstrate that the state is the sole responsible for having violated the democratic and political liberties, for which we consider the participation of the Mexican state in the forced disappearance of the lawyer absolutely possible, as part of the general strategy of the regime to repress and silence the social movement.
A week has elapsed since the moment of his disappearance, which occurred on May 10, 2018 around his home in San Agustín de las Juntas, Oaxaca, and despite the complaint that was filed before the State Attorney General's Office and the complaint According to the Ombudsman for Human Rights of the People of Oaxaca, the authorities have not provided any information on the search for the defender and the results of this.
The terrible case of a forced disappearance of a Defender of human rights and left social causes defenders reflects the vulnerability that exists in Mexico in terms of the exercise of rights for the people and the degree of decomposition of the state itself, increasingly tending to barbarism and fascism, especially now with the so-called Law of Interior Security that gives big reach for the militarization of the country and the repression of social movements.
We join the demand for the presentation of Dr. Ernesto Sernas García alive, we stand in solidarity with his family and the companions of the CURRENT OF THE PEOPLE RED SUN, we accuse the Mexican state and its various levels of government responsible for the physical and emotional integrity of the companion and we call the broad popular movement to unify around the struggle against state terrorism that is taking the freedom and blood of thousands of Mexicans throughout the country who aspire to a profound change, a new homeland and a new society." 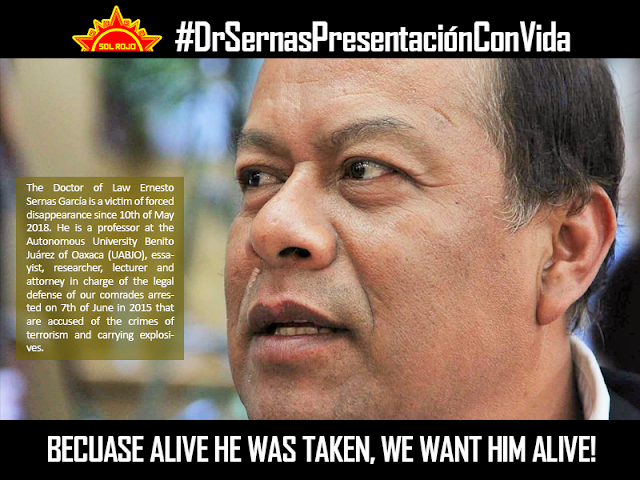 (Denouncement demanding the presentation of Ernesto Serna García y Bruno Alonso Avendaño forcefully disappeared in Oaxaca, México)
Abstract: During the last terms of government, Mexico lives in a state of increasingly unbearable violence which worsens every day, marked by the disappearance of thousands of people, extrajudicial executions, raids and the systematic use of torture as a mechanism of investigation implemented by the various armed forces and the different police levels.
In the context of the federal electoral process of July 5th, the violence has intensified, every day we have more cases of disappearances linked to the defense of the human rights of the subaltern social classes and sectors, as well as disappearances, at a first glance, not related to those processes. In this scenery, Ernesto Serna García –professor at UABJO University in Oaxaca, Mexico and a human rights defense lawyer—, and Bruno Avendaño –brother of the artist Lukas Avendaño— have disappeared.We share this information and request that you sign this denouncement in solidarity with the disappeared and their families and in demand for the authorities to carry out the research work promptly.