Freedom for comrade Theo and the Communist prisoners in Europe! 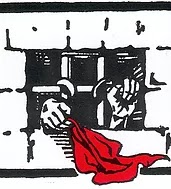 We publish this declaration in solidarity with comrade Theo:


Proletarians of all countries unite!


Freedom for comrade Theo and the Communist prisoners in Europe!

We, revolutionary organizations and members of different revolutionary editorial boards, declare our unwavering solidarity with the Maoists who are in prison in the jails in Europe. The general offensive carried out in Europe mainly by the old imperialist powers against the rising trend is an example of the general crisis of imperialism.

Those who face police harassment, arrests, jail sentences and fake trials deserve our infallible solidarity and support as they are put under the fire of an enemy who thinks it can save itself from its inevitable downfall by criminalizing movements, organizations and individuals.

The example of comrade Theo strikes us as proof of true communist spirit in the face of repression. After having been arrested at his work place, following a fabricated charge with no proof, comrade Theo was put in the jails of the French State on July 22, 2019. From then on, comrade Theo, deeply involved in the class struggle in the French State and abroad, with admirable spirit of proletarian and communist determination, raised his spirits and began to turn the prison into a place of combat. His hunger-strike is proof of this. It started on the day of his arrest and is carried on as of today, in defiance of several administrative prison intimidations to make him stop completely. Under constant attacks from the enemy materialized int he form of prison guards and prison administration, who want to make him send him to the psychiatric ward, the clarity of mind and spirit of the comrade displays can be found in his public letters which are all example of his determination and correct appreciation of the real reason he is currently detained.

The struggle for the freedom of Maoist prisoners and revolutionary prisoners of the national liberation struggles in Europe and throughout the world is a basic necessity of the necessary solidarity that we, guided by Proletarian Internationalism, assume. Comrade Theo himself, both inside and outside the jail, raised the slogan for the freedom of political prisoner Georges Ibrahim Abdallah. But it is not enough. We do not ask the enemy to be free. The rising trend of revolution will indeed provoke more wrath from the old bourgeois states in Europe and the world and surely the attacks against the communist forces who take up the task of reconstitution of the Communist Parties are only beginning.

Facing this situation, our call for freedom is not a plea. It is declaration that we take up the task of defending the lives and the rights of all of those of us who are targeted by the enemy for their role in bringing forward the correct ideology of the proletariat Marxism-Leninism-Maoism, principally Maoism, to the whole world.