PERÚ: . ENARBOLAR, DEFEND AND APPLY THE STATUTES OF THE GLORIOUS AND HISTORIC SUTEP UNIQUE!. · ·

Arose from the fragror of class struggle and the Magisterial Classist Front, on the Camino de Mariátegui and with the contribution of the Master, Germán Caro Ríos: in hard brega, crushing the opportunism of that time, which he intended to use the masses to form one union crancia called, ′′ federation ", triumphed the Classist Union Line and constituted the only Union of Education Workers of Peru, 1972, with its pristine Statutes, Principles, Motto; later, in the Statutory Congress of the year 2003, are endorsed and remembers, refocus and rebuild this Glorious and Historical Union of Workers in Education. The redominated revisionism changes the Statutes and turns it, usurping it, into SUTE ′′ Unitary ", to prostrate and put it at the service of Yankee employer, reaction and imperialism, even appropriating more than 2 000 000 000 Billion Suns in ′′ active ′′ of the Magisterial Perrama, the tahúres and rascals of the so-called ′′ homeland ′′ political party, the year 1984. Subsequently, it lifts black head the opportunism and its hyena jaws vociferan : ′′ federation ′′ to destroy the UNIQUE SUTEP; hyena dreams have. And there are direct testimonies, as in the HNI of 2018, MINEDU gave them legal advisers to the Ministry of Labour to form this rotten union crust: FENATEPERÚ, twin sister of the perfidious revisionism of the ′′ homeland ′′ party. In addition, to impersonating the platform for fighting and claiming 2017: ′′ modify certain items ", instead of ′′ repealing ′′ the MRL of employer and Imperialism, mainly Yankee, Law 29944. There are the evidence, signed by the round of reaction, with his IV Magisterial Scale, Pedro Castillo Terrones; an agent of the employer to destroy the UNIQUE SUTEP and support the privatization of Public Education and the mass dismissal of the National Teachery. Faced with these sinister dreams of angry hyena, it is imperative to develop the II Union School on the Fundamentals, Conceptions and comparison of the Statutes of the UNIQUE SUTEP with those of the SUTE of the employer, MINEDU and the agents of Yankee Imperialism and Patronalism, the self-called FENATEPERÚ. ENARBOLAR, DEFEND AND APPLY THE STATUTES OF THE GLORIOUS AND HISTORIC SUTEP UNIQUE!. 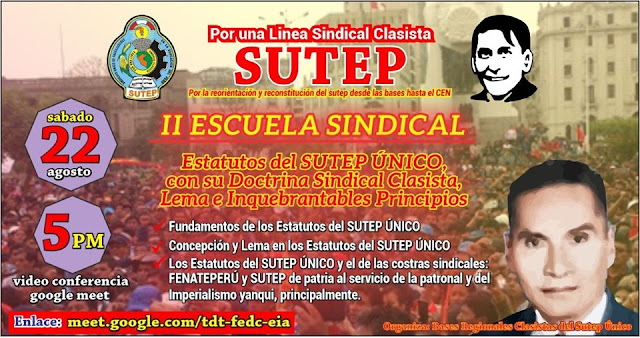