AUSTRIA - Successful actions in solidarity with Varavara Rao, GN Saibaba and all political prisoners in India

As reported on the homepage of the Antifascist Action - Info Sheet from Austria, different actions in solidarity with Varavara Rao, G.N. Saibaba and all political prisoners in India were carried out in different cities of Austria. Flyers were distributed, posters and graffiti were put up and events were held. 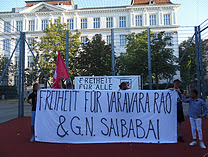 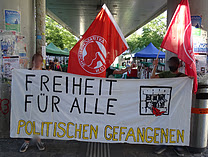 In a call of the anti-fascists and revolutionaries from Austria it was said:

“Also we in Austria must support the campaign for release, this is part of international solidarity! Moreover, the problems in India cannot exist in isolation from the problems here. Here too, the Corona pandemic has been used as an excuse to pass on the costs of the crisis to the people. Here, too, especially during this period, anti-democratic measures and laws have accumulated which serve to control the people. It is also Austrian monopolies that make good money from the plundering and oppression of the Indian subcontinent. The people of Austria have no interest in land theft and genocide being carried out in India with the exported imperialist capital, while in Austria the austerity fund is being set up. The people of Austria have no interest in war being waged for these half-colonies.

In this sense, the resistance of the masses in India is to be welcomed and supported by all means. For the most part, the masses in India have realised that the root of the problems is not the virus but imperialism, which will resort to ever worse oppression as the crisis worsens. Because the masses in the majority have recognized this deception, the ruling classes have already played out their hand.”

It was reported that the actions were carried out in working-class areas and were well received by the popular masses, which showed that solidarity with the revolution in India is well understood by the masses in Austria.

"We talked with people from Bulgaria, Turkey and Serbia, who know a lot about the problems, who know the problems that come from the imperialist oppression, even if they look different in different countries", it was reported. It also was correctly pointed out that it is not the enormous exploitation and oppression that makes India special, but the great resistance. In January, the record for the biggest strike in human history was broken once again. At the same time, India is experiencing the biggest revolution in the world, the People's War in India, led by the Communist Party of India (Maoist) which has already liberated large areas from imperialism. G. N. Saibaba pointed out: "...that the anti-feudal and anti-imperialist struggle that is spreading all over India and the revolutionary movement that exists in a considerable part of the country are related and intertwined."

These were successful actions, as an important contribution of the powerful actions that were carried out internationally in the past weeks!

For the immediate release of Varavara Rao and G. N. Saibaba!

Freedom for all political prisoners!