COMMUNIST INTERNATIONAL NEWSPAPER: FAILURE OF THE REACTIONARY ELECTIONS, THE ROLE OF THE LOD (MOVADEF) AND THE ACTIONS OF THE “FEUDAL WARLORDS” OF VRAEM

FAILURE OF THE REACTIONARY ELECTIONS,

THE ROLE OF THE LOD (MOVADEF)

AND THE ACTIONS OF THE “FEUDAL WARLORDS” OF VRAEM

“Destroy bureaucratic capitalism, both private and state; confiscate all its properties, goods and economic rights for the benefit of the new state, as well as those corresponding to imperialism”.

(1st Congress of the Communist Party of Peru, General Programme of the Democratic Revolution)

The faction of the bureaucratic bourgeoisie in the second round of the general elections for the replacement of the reactionary authorities of the old landlord-bureaucratic state at the service of imperialism, mainly Yankee, as a consequence of the resounding failure of this reactionary electoral process 2021, by those farcical traps of the farce itself which are the reactionary elections, will be represented by the candidate of the “Peru Libre” party, Castillo.

Castillo of “Perú Libre”, the electoral acronym owned by the corrupt ex-governor of Junin, is not the winner of the first round, but the one who came in first place of all the defeated, that is to say of the 18 electoral groups or acronyms with their candidates who were only rejected by those who were called to elect them. The counter-revolutionary “rondero”, Castillo, came first in the first round on 11 April with only 11.04% of the votes of the citizens considered eligible to vote in these reactionary general elections according to the Peruvian Electoral Processes Office (ONPE). In other words, almost 89% of those registered either did not vote or voted against the first-placed candidate, that is, the vast majority of those called to elect him in order to “legitimise” him as future president, should he be appointed by means of electoral fraud, rejected Castillo. In other words, even with fraud, he cannot become president “legitimised by the majority of the citizens’ vote in free elections”. The case is even more disastrous for the one who came second and will be his contender in the second round on June 6, as representative of the comprador faction of the big bourgeoisie, Keiko Fujimori of Fuerza Popular, who only officially obtained 7.72% of the electoral total, that is, more than 92% of those called to “elect” rejected her.

Both candidates, Castillo and Fujimori, are the product of the reactionary failure of the first round of the reactionary elections of 2021, which confirmed what reaction feared so much and with it the failure to “legitimise” the new reactionary authorities, that is, “ultimately” with “a disdain of the citizenry” for the political class of the country. That is to say, an absolute absence of hope in what the leaders of the parties that harbour them can offer Peruvians in these elections, regardless of their ideological background or the convictions they claim to embody. A spontaneous rejection of the old State, its parties, personalities, institutions, etc., was thus expressed. Nearly 42% of the electorate either did not vote or voted white or null, and the rest who voted for a “party” or candidate did so mostly against the two candidates who have gone to the second round in order to “twist the electorate’s hand” (in the words of a reactionary political commentator).

The arch-opportunist “rondero” Castillo, as a result of this reactionary failure, was converted by a stroke of luck into the “figurehead” of the bureaucratic faction of the big bourgeoisie and head of the opportunists and revisionists of the most diverse stripe. Castillo was a member of the “peasant patrols” (“rondas campesinas“), a counter-revolutionary organisation at the service of the low-intensity war led by US imperialism against the people’s war. These “rondas” are an auxiliary force of the genocidal armed forces in the counterrevolutionary war. Castillo, then, as a representative of the conservative and counterrevolutionary peasants for more than two decades belonged to the party of the “Yankee with a chullo” Toledo, whom he abandoned. Then, in collusion with the rats of the right opportunist, revisionist and capitulationist line (ROL) he climbed up to the presidency of the National Struggle Committee of the Indefinite National Strike of Sutep of 2017 (HNI-2017), against the consistent opposition of the rank and file and leaders of the class-conscious teachers. HNI-2017 which he betrayed in the service of the bosses (Ministry of Education). This opportunist after betraying the HNI and selling the list of demands to the parronal with the help of the parronal and the rats of the ROL with influence in some sectors of the teachers, constituted the famous opportunist and divisive federation (Fundep) to oppose the reconstitution of classist Sutep from the rank and file.

Behind the opportunist Castillo, representative of the bureaucracy, are other opportunists as shameless as he, namely those of the Frente Amplio, those of “New Peru” and others of the most varied colours and shagginess, but all of them aligned behind the reactionary task of restructuring the old bureaucratic landlord state to “overcome the generalised crisis”, saviours of the state collapse through their vaunted “constituent assembly” and “new constitution”. How would it benefit the people and the nation? Obviously nothing, or have the proletariat, the mainly poor peasantry and the people in general ever benefited from the implementation of these “famous democratic proposals”? All these and revisionists are about to push forward this reactionary task of state restructuring in order to further crush the people and seek to annihilate the people’s war. Nothing good for the people can come from the reactionary elections, everything good for the people can only come from the people’s war.

Behind all the opportunists and revisionists, practitioners of parliamentary cretinism, pursuing their path of serving the plans of reaction, the capitulators of the right opportunist line (ROL revisionist) with their spawn Movadef and Fundep have also placed themselves in single file and are also seeking their place in these reactionary jousts, although in their own way and according to their own dynamic, those of the VRAEM of the opportunist line, followers of the renegade and mercenary “José” and company, the latter have been seeking their enlistment for some time now through negotiations with so-called “reservist” spokesmen, agents of the army and the Dircote (like this “Sacha”) for the sake of a supposed “national reconciliation”. These traitors and renegades of the mercenary “José”, as “feudal warlords” are making their presence felt in these elections with some “actions”, they are trying to get a great resonance in order to position themselves better in view of the results of the elections; to get better conditions of “negotiation” and to keep their miserable existence as “feudal warlords“.

These elections show the further collapse of the old state and the old society, which is more and more ripe to be swept away by the people’s war. Their bureaucratic path is developing in the midst of more reactionary struggle, which, as it had to be, has the participation of opportunism and revisionism. That is why we say, this reactionary general election of 2021, as it had to be, has been presented and developed as a defence of the outdated existing order and evolution of Peruvian society; and they express a greater collusion and reactionary struggle between the two factions of the big bourgeoisie and between the groups that make up each of them. These sharp contradictions must also be framed within the reactionary plan of the “Bicentenary” and the continuation of the application of the three counter-revolutionary tasks which they need to develop and which in essence have not changed (to boost bureaucratic capitalism, to restructure the old state and to seek to annihilate the people’s war), specifically seeking to conjure up the successful culmination of the general reorganisation of the Communist Party of Peru (RGP), in and for the people’s war in the struggle to the death against the revisionist and capitulationist rats of the so-called “letters of peace” (i.e. Modavef) or the one headed by the traitor, renegade and mercenary “José” of VRAEM) once again we say; keep dreaming, because its realisation is a historical and political impossibility.

Mainly Yankee imperialism is aiming for a new plan (2021 – 2036) through a new “elected” reactionary government, if not, it will be because of the coup d’état that is always around, but whoever heads the new reactionary government, this new government will be more starving, more genocidal and more pro-Yankee than all the previous ones, it will use the “bicentenary” by moving patriotism, “national reconciliation”, “all bloods” and even “new constitution”, bearing in mind that for this old and rotten bureaucratic landlord state, it is very important to give legitimacy to the regime and “legitimacy” is an essential component of its counter-subversive strategy of low intensity warfare (GBI; guerra de baja intensidad) and that is the failure they have reaped. “Legitimacy” of the new government for its low intensity warfare by applying more and more repression of the just and growing popular protest.

Failure of the electoral farce of 2021, in elections considered crucial for the reaction, for which, in conclusion, we quote Chairman Gonzalo in his speech on the 10th anniversary of the People’s War:

“As the recent Session of the Central Committee, celebrating the triumphant 10th ANNIVERSARY OF THE PEOPLE’S WAR, concluded, Peruvian reaction and its master, mainly Yankee imperialism, need to re-boost bureaucratic capitalism, restructure the state again and annihilate the people’s war. These are their needs and their dreams because bureaucratic capitalism is in its deepest economic crisis to date, plunging the whole of the old Peruvian society into its most serious general crisis; while its state, the outdated dictatorship of big bourgeoisie and landowners, restructured for the third time in this century, in ‘78, as it had to be, continues to be a rotten bureaucratic-military machine, more oppressive and bloody the more impotent it appears in the face of the development of the people’s struggle; and because the people’s war, in these ten victorious years, sustained by the masses mainly of the poor peasantry and under the leadership of the Party, has come to realise the shockingly real perspective of seizing power throughout the country for the proletariat and the people. Reactionary and imperialist needs, plans and desires will inevitably further strengthen the class struggle, developing the mass struggle and raising the people’s war to its highest expression”.

Special for the internet newspaper ci-ic.org 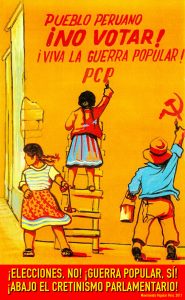