We leave the google meet link of the III UNIQUE SUTHEP SCHOOL: meet.google.com/guo-xahy-hhf

A somera synthesis to understand the process of privatizing education in Peru. What does it involve privatizing education? Privatizing, involves transferring the social function of education that the State has, to the Monopolic-non-State Capital; that is, to the Big Burghergy Buyer and Landowners. Privatization is a political tool, which not only represents a renunciation by the state of its ability to address social problems and respond to social needs, but is part of a set of innovations, organizational changes and new relationships and social associations, which together play an important role in reconfiguring the state itself. In this context, the reconfiguration of education grants legitimacy to the concept of education as a profit-making objection, available through contract and as a transaction for sale Privatization works often as a political tool with a great diversity of purposes and purposes. It's not just about the State giving up its ability to manage social problems and respond to social needs. This is actually a new mode of State action. The privatization of education and social security implies a change in the role played by the State, which ceases to directly provide educational services to become a contractor, supervisor and evaluator of services provided by a whole range of providers ′′ PRIVATIZATION FIND OUT IN PUBLIC EDUCATION. Brussels, 2008 (Report). Stephen J. Ball and Deborah Youdell. Institute of Education, University of London How does this transfer of ′′ assets ′′ (part of Monopoly-State Capital) make? Through the APPs counting on the support of the SUTEP of the employer (CEN with the rascals of homeland black and its private bank: Magisterial Spill) and, his twin brother, opportunism: FENATEPERÚ. Legal backing: LGE 28044 and LRM: 29944. Synthesis: sinister Yanki Imperialism Plan, primarily to deny the right of the people to education; counting on the revisionism of ′′ homeland black ′′ with his twin brother opportunism with his spawn: ′′ FENATEPERÚ ". The privatization of the ′′ social function of Education ", is part of the plans of ′′ Neoliberal Policy ′′ of the Washington Consensus (designed around 1989). The privatization of education is part of education of the objective (in the country), to restructure this state and to re-boost bureaucratic capitalism. Currently, this reactionary Government has promulgated, Ministerial Resolution 326 to execute this process, using the ′′ Entity Without Finals of Profit ′′ (EFL) with a validity convention: four to eight years, with the participation and responsibility of the Regional Government ( GORE). As far as it's appropriate, comply with the UNIQUE SUTEP directives: Forming the Defense Fronts of the Public School with parents of family and teachers. 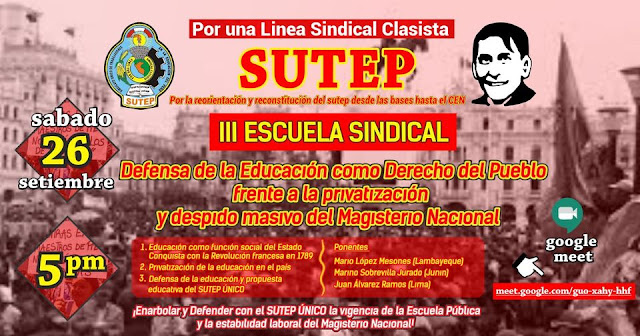