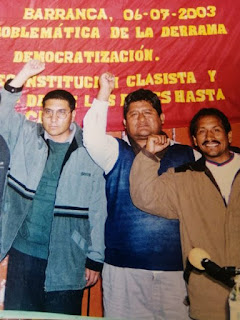 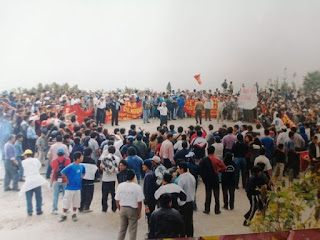 The DEFENSE COMMITTE OF THE UNIQUE SUTEP OF THE PROVINCE OF BARRANCA, reports the sensitive passing of the Classist and Combative Master: OCTAVIAN SATURNINO GUARDIA ARCE (62) in the city of Lima. Natural of Paramonga District.

We extend our most sensitive condolences to your family.

He worked at the Educational Institution ′′ Ventura Ccalamaqui ′′ of the Province of Barranca. Consequent master who wielded classist principles in the most raw and disposed moments of the beginnings of the II REORIENTATION AND RECONSTITUTION OF THE UNIQUE SUTEP in the 2001 s, laying the foundations to bloom the CONARE in 2003 and be part of the INDEFINITE NATIONAL SMELL of 2003 after 10 years of ′′ PAROS ′′ that the CEN - SUTEP UNITARY in the hands of loan sharks, traffickers and sells teachers of RED HOLAND and their double language of the ′′ Unit ′′ and ′′ 0 rganicity ′′ were unmasked and crushed at the bases mainly at the bases of the Province of Barranca that today is usurped by pseudos ′′ leaders ′′ in contubernio with FENATEPERÚ.

THE OCTAVIAN TEACHER (in the back of master RÍOS) present in a mass action as a leader together with the agricultural sector in HNI-2003 near UNASAM University we were suppressed by the reactionary hordes of the navy with 2 helicopters gunships of war and nearly a hundred marine soldiers lashed out with bullets and bombs leaving dozens of wounded and dead shocking nationally and internationally the fascist and genocidal act of the government on shift.

"... IF THEY TELL YOU THAT I FALLED.... DON ' T CRY FOR ME.... Attitude of class of the OCTAVIAN master, the teachers, the peasants and the MIRTIRES who fell that JUNE 2003. The sadness of those years Today it is more applied despite its loss to COVID, a bacteriological weapon of Yankee imperialism against the oppressed masses and its re-convenient ideological, political, economic and social conception in its slow agony of the face of the earth.

The II REORIENTATION AND CLASSIST RECONSTITUTION of the UNIQUE SUTEP continues to battle between breakthroughs and setbacks despite the deluded dreams that seek to annihilate it by the miserable and loan sharks of CEN-SUTEP UNITARY - PR and his twin brother FENATEPERÚ together with the government headed by the fascist and genocidal Vizcarra.

THE MADE OF THE GREEN ABOUT ME

I was taught a song freedom

My life was song that the people

MAY A FIGHT SONG BE DEATH

DEAR MOTHER, DIE FOR THE PEOPLE,

Strengthen and persist in II Reorientation and Reconstitution in all classist bases of SUTEP UNIQUE!!

Defending the validity of the SUTEP ONLY classist and combative!!

Defending the free public education of the people!!