COMMUNIST INTERNATIONAL NEWSPAPER: CELEBRATE ONE HUNDRED AND FOUR YEARS SINCE THE TRIUMPH OF GREAT SOCIALIST OCTOBER REVOLUTION, GUIDED BY THE GREAT LENIN

CELEBRATE ONE HUNDRED AND FOUR YEARS SINCE THE TRIUMPH OF GREAT SOCIALIST OCTOBER REVOLUTION, GUIDED BY THE GREAT LENIN!

1917, with the victory of the October Revolution in Russia, the class established the dictatorship of the proletariat and opened a new era.

The victory of the October Revolution in 1917 marked an extraordinary milestone in world history, the end of the bourgeois revolution and the beginning of the world proletarian revolution. This new era was marked by the intensifying violence expressing the decrepitude of the bourgeoisie in leading the revolution and the maturity of the proletariat to take, lead, and maintain the power of the dictatorship of the proletariat. The revolutions of the oppressed nations also occur within this framework. The revolutionary power to conquer and maintain the new power today is People’s War.

Lenin develops Marxism and elevates it to a second stage, Marxism-Leninism. Stalin will continue the work of Lenin and struggle in the process of constructing socialism in the USSR against the deviations of Trotsky, Zinoviev and Kamenev, which ended in 1937; it took a 13 year struggle, and it is false that he solved things administratively. We accept Chairman Mao’s position on the role of Comrade Stalin, that 70% are positive, a great comrade.

The experiences of the Restoration in the USSR and in China leave us great lessons, both positive and negative; particularly noteworthy are the gigantic steps in the furnishing of the new State and how the Great Proletarian Cultural Revolution is the solution to ban the Restoration.

Chairman Mao said, “In a short time, the world has changed like never before. What took 250 years in England will take 50 years in China, then one can see the potential of the relations of production. The ancient Tsarist Russia, backward with the burden of centuries, with a tormenting feudal system that had rotten the system from its deepest roots to the most superficial; with a brutal autocratic dictatorship was called the gendarme of Europe, but the revolution abolished it, put out centuries of oppression and reached high levels of production for a few decades and laid the foundation for what the revisionists later used as the economy of power and superpower.

On this anniversary, which celebrates 104 years of the victory of the Great Socialist Revolution in Russia, led by the great LENIN and his continuator Comrade Stalin, it is needed to reaffirm the progress made in the New Socialist State and in the five-year plans adopted by the CPSU which the reactionaries and counterrevolutionaries have to recognise as well. This is thanks to Comrade Stalin in building socialism and defending the dictatorship of the proletariat, that is why he hated so much by the world reaction and revisionism.

See the five-year plans according to non-Marxist writers like Bernald and Colin… (III. Plenum of the Central Committee of the PCP, 1992) Five five-year plans, twenty-five years, with World War II in the USSR, it had 25 million dead and had to apply them on scorched earth. Chairman Mao says Stalin was unable to know how to balance the production system, he did not put it on the two feet of agriculture and industry. Despite the mistakes, the strength of the power of these new social relationships created a complete revolution and certain bases of economic development that met the needs of millions… The World Bank analyses in a book 30 years of the development of backward countries… they conclude that the one who made the biggest leap in the shortest possible time was China; it was not Teng’s laws but the development of China’s economy made in the base areas in the Democratic Revolution, which was made after the liberation of 1949.

The USSR under Stalin’s leadership and the CP, with the Red Army and the sacrifice of more than about 25 million lives of Soviet citizens and millions of lives of the peoples of Asia, defeated the fascist state of Germany in the Second Imperialist War, world war of plunder, HITLER, who had no solution but to commit suicide. Stalin led the world anti-fascist front during the war, that saved the Soviet Union and served the liberation of Europe and contributed to the revolution in Asia and around the world.

All that the October Revolution and all the comrades who sacrificed themselves at the moment of the opening of the New Era left, nothing from the enemies, no oppressor has forgiven them and the proletariat and peoples of the world thanked them and dreamed of equality, justice and peace for all; founded today, tomorrow and forever by the Titans of thought and action, with the victory of the Chinese Revolution (1949), the initiation of the People’s War in Peru (May 17, 1980), which is lead by the PCP, the People’s War, led by the CPI (maoist), the People’s War in Turkey led by the TKP/ML, the People’s War led by the Communist Party of the Phillipines and those which will initiate, this is a reality, not just a pipe dream.

May the thunder of the canons of Petrograd be our heartbeats! 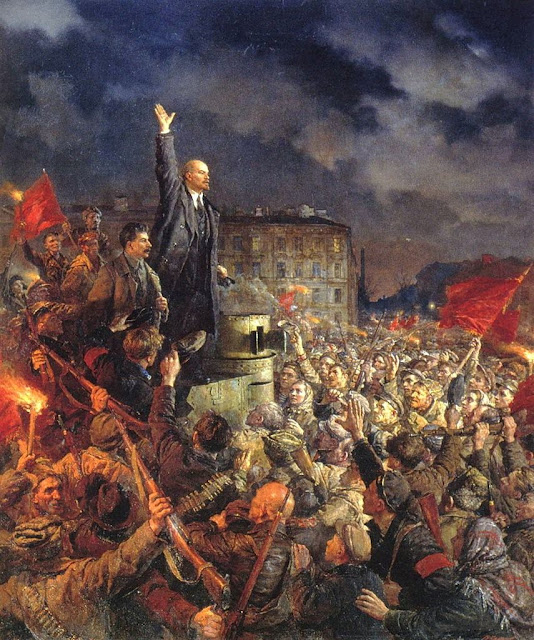 The victory of the October Revolution in 1917 marked an extraordinary milestone in world history, the end of the bourgeois revolution and the beginning of the world proletarian revolution. This new period was signaled by the intensifying violence expressing the decrepitude of the bourgeoisie in leading the revolution and the maturity of the proletariat to take, lead, and maintain the power of the dictatorship of the proletariat. The revolutions of the oppressed nations also occur within this framework.

The first imperialist world war and the first victorious socialist revolution, the October Revolution, have changed the whole course of world history and ushered in a new era.

The October Revolution has opened up wide possibilities for the emancipation of the peoples of the world and opened up the realistic paths towards it; it has created a new front of revolutions against world imperialism, extending from the proletarians of the West, through the Russian revolution to the oppressed peoples of the East.

The Chinese people have always considered the Chinese revolution a continuation of the Great October Socialist Revolution and they regard this as a great honour.

The road of the October Revolution is, fundamentally speaking, the bright road of progress for all mankind. 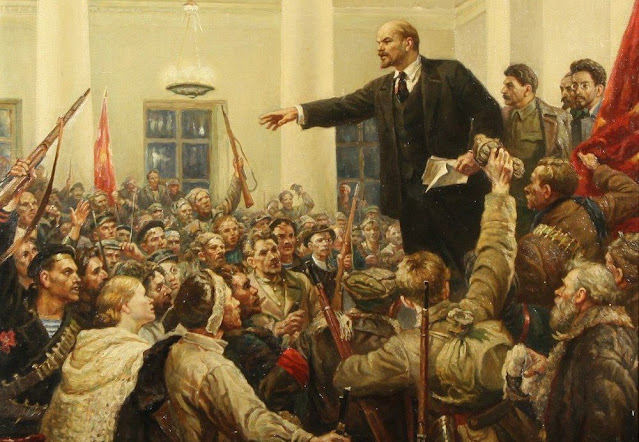