SUTEP BARRANCA-PERU: July 06th is day of resistance and combat !

It is not possible to democratize the teaching of a country without democratizing its economy and thus democratizing its political superstructure
′′ The master fighting is also teaching ′′
It's been more than 100 days that the fascist government of Vizcarra decreed quarantine and absolute lockdown by covid 19 and so far it has not been able to solve the problem of the national teacher, more than 200 deceased teachers without the state meeting your needs, more on the contrary has generated harassment with its pseudo evaluation and performance programs such as the monitoring light plan ignoring the real needs of students suffering from the different diseases hit by hunger and misery ..
For this July 6th, the union crusts of the Red and Fenateperu CEN as faithful implementers of the educational policy of the old Peruvian state have programmed their fakers ′′ virtual strike ′′ as a greeting to the flag, to comply with the orders of the employer, with his black hyena dreams of pretending to destroy SUTEP with its unwavering ′′ Classist union line ". When has a master with classist slogan prostrated on his knees to the crumbs the old reactionary state throws at them? - NEVER
That's why we say! Down with the pseudo virtual strike of the rotten union crust begotten by opportunism with advice from the MINEDU with his twin brother, the encalled revisionists of the red homeland and fenateperu!, Down and out the Red Homeland CEN with his twin brother: fenateperu!
July 06th is day of resistance and combat to rip off the employer just claims!.
Also this miserable government of Vizcarra has proven to be at the service of the great bourgeois and landowners grouped in the CONFIEP, generating more value to workers until they cut their salary, leaving them on the brink of poverty, as does the petty management of the mayor of Lima Jorge Muñoz with the cleaning workers (spotobur) OUR SOLIDARITY TO FIGHT THEM!.
That's why there is a need to leave absolute confinement and rip off the rights that continue to steal from us every day, corruption is an evil cancer in the bowels of the old Peruvian state.
DOWN THE SEUDO VIRTUAL YELLOW STRONGS OF OPPORTUNISM!!
DOWN THE RED HOLAND CEN AND HIS BROTHER TWIN FENATEPERU FAITHFUL IMPLEMENTATORS OF THE PATRONAL!!
JULY 6 DAY OF FIGHT AND FIGHT! 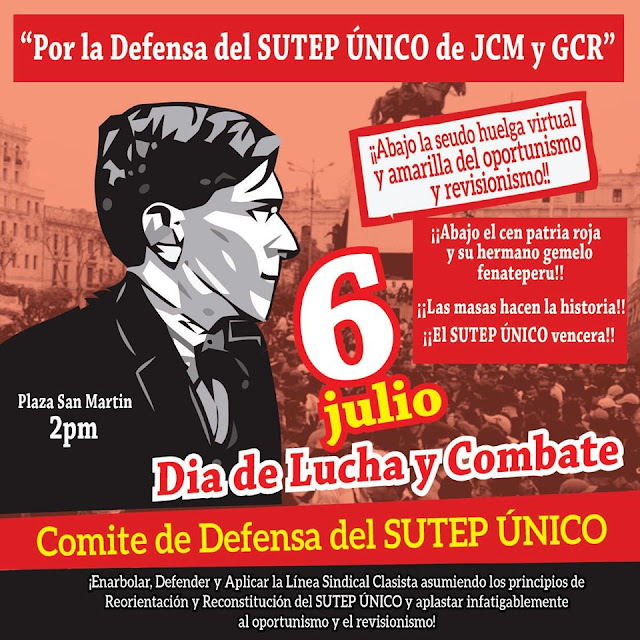