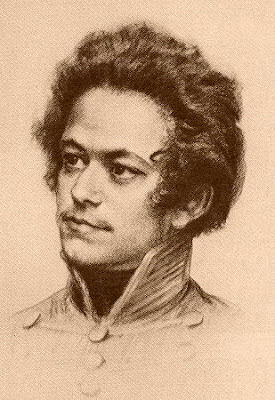 Marx, Karl, was born on May 5, 1818 (New Style), in the city of Trier (Rhenish Prussia). His father was a lawyer, a Jew, who in 1824 adopted Protestantism. The family was well-to-do, cultured, but not revolutionary. After graduating from a Gymnasium in Trier, Marx entered the university, first at Bonn and later in Berlin, where he read law, majoring in history and philosophy. He concluded his university course in 1841, submitting a doctoral thesis on the philosophy of Epicurus. At the time Marx was a Hegelian idealist in his views. In Berlin, he belonged to the circle of “Left Hegelians” (Bruno Bauer and others) who sought to draw atheistic and revolutionary conclusions from Hegel’s philosophy.

After graduating, Marx moved to Bonn, hoping to become a professor. However, the reactionary policy of the government, which deprived Ludwig Feuerbach of his chair in 1832, refused to allow him to return to the university in 1836, and in 1841 forbade young Professor Bruno Bauer to lecture at Bonn, made Marx abandon the idea of an academic career. Left Hegelian views were making rapid headway in Germany at the time. Ludwig Feuerbach began to criticise theology, particularly after 1836, and turn to materialism, which in 1841 gained the ascendancy in his philosophy (The Essence of Christianity). The year 1843 saw the appearance of his Principles of the Philosophy of the Future. “One must oneself have experienced the liberating effect” of these books, Engels subsequently wrote of these works of Feuerbach. “We [i.e., the Left Hegelians, including Marx] all became at once Feuerbachians.” At that time, some radical bourgeois in the Rhineland, who were in touch with the Left Hegelians, founded, in Cologne, an opposition paper called Rheinische Zeitung (the first issue appeared on January 1, 1842). Marx and Bruno Bauer were invited to be the chief contributors, and in October 1842 Marx became editor-in-chief and moved from Bonn to Cologne. The newspaper’s revolutionary-democratic trend became more and more pronounced under Marx’s editorship, and the government first imposed double and triple censorship on the paper, and then on January 1, 1843, decided to suppress it. Marx had to resign the editorship before that date, but his resignation did not save the paper, which suspended publication in March 1843. Of the major articles Marx contributed to Rheinische Zeitung, Engels notes, in addition to those indicated below (see Bibliography), an article on the condition of peasant vinegrowers in the Moselle Valley. Marx’s journalistic activities convinced him that he was insufficiently acquainted with political economy, and he zealously set out to study it.

In 1843, Marx married, at Kreuznach, Jenny von Westphalen, a childhood friend he had become engaged to while still a student. His wife came of a reactionary family of the Prussian nobility, her elder brother being Prussia’s Minister of Interior during a most reactionary period – 1850-58. In the autumn of 1843, Marx went to Paris in order to publish a radical journal abroad, together with Arnold Ruge (1802-1880; Left Hegelian; in prison in 1825-30; a political exile following 1848, and a Bismarckian after 1866-70). Only one issue of this journal, Deutsch-Französische Jahr- bücher, appeared; publication was discontinued owing to the difficulty of secretly distributing it in Germany, and to disagreement with Ruge. Marx’s articles in this journal showed that he was already a revolutionary, who advocated “merciless criticism of everything existing”, and in particular the “ criticism by weapon ” , 29 and appealed to the masses and to the proletariat.

In September 1844 Frederick Engels came to Paris for a few days, and from that time on became Marx’s closest friend. They both took a most active part in the then seething life of the revolutionary groups in Paris (of particular importance at the time was Proudhon’s doctrine, which Marx pulled to pieces in his Poverty of Philosophy, 1847); waging a vigorous struggle against the various doctrines of petty-bourgeois socialism, they worked out the theory and tactics of revolutionary proletarian socialism, or communism (Marxism). See Marx’s works of this period, 1844-48, in the Bibliography. At the insistent request of the Prussian Government, Marx was banished from Paris in 1845, as a dangerous revolutionary. He went to Brussels. In the spring of 1847 Marx and Engels joined a secret propaganda society called the Communist League; they took a prominent part in the League’s Second Congress (London, November 1847), at whose request they drew up the celebrated Communist Manifesto which appeared in February 1848. With the clarity and brilliance of genius, this work outlines a new world-conception, consistent materialism, which also embraces the realm of social life; dialectics, as the most comprehensive and profound doctrine of development; the theory of the class struggle and of the world-historic revolutionary role of the proletariat—the creator of a new, communist society.

On the outbreak of the Revolution of February 1848, Marx was banished from Belgium. He returned to Paris, whence, after the March Revolution, he went to Cologne, Germany, where Neue Rheinische Zeitung was published from June 1, 1848 to May 19, 1849, with Marx as editor-in-chief. The new theory was splendidly confirmed by the course of the revolutionary events of 1848-49, just as it has been subsequently confirmed by all proletarian and democratic movements in all countries of the world. The victorious counter-revolutionaries first instigated court proceedings against Marx (he was acquitted on February 9, 1849), and then banished him from Germany (May 16, 1849). First Marx went to Paris, was again banished after the demonstration of June 13, 1849, and then went to London, where he lived till his death.

His life as a political exile was a very hard one, as the correspondence between Marx and Engels (published in 1913) clearly reveals. Poverty weighed heavily on Marx and his family; had it not been for Engels’s constant and selfless financial aid, Marx would not only have been unable to complete Capital but would have inevitably been crushed by want. Moreover, the prevailing doctrines and trends of petty-bourgeois socialism, and of non-proletarian socialism in general, forced Marx to wage a continuous and merciless struggle and sometimes to repel the most savage and monstrous personal attacks (Herr Vogt). Marx, who stood aloof from circles of political exiles, developed his materialist theory in a number of historical works (see Bibliography), devoting himself mainly to a study of political economy. Marx revolutionised this science (see “The Marxist Doctrine”, below) in his Contribution to the Critique of Political Economy (1859) and Capital (Vol. I, 1867).

The revival of the democratic movements in the late fifties and in the sixties recalled Marx to practical activity. In 1864 (September 28) the International Workingmen’s Association—the celebrated First International—was founded in London. Marx was the heart and soul of this organisation, and author of its first Address and of a host of resolutions, declarations and manifestos. In uniting the labour movement of various countries, striving to channel into joint activity the various forms of non-proletarian, pre-Marxist socialism (Mazzini, Proudhon, Bakunin, liberal trade-unionism in Britain, Lassallean vacillations to the right in Germany, etc.), and in combating the theories of all these sects and schools, Marx hammered out a uniform tactic for the proletarian struggle of the working class in the various countries. Following the downfall of the Paris Commune (1871)—of which Marx gave such a profound, clear-cut, brilliant, effective and revolutionary analysis (The Civil War in France, 1871)—and the Bakuninist-caused cleavage in the International, the latter organisation could no longer exist in Europe. After the Hague Congress of the International (1872), Marx had the General Council of the International transferred to New York. The First International had played its historical part, and now made way for a period of a far greater development of the labour movement in all countries in the world, a period in which the movement grew in scope, and mass socialist working-class parties in individual national states were formed.

Marx’s health was undermined by his strenuous work in the International and his still more strenuous theoretical occupations. He continued work on the refashioning of political economy and on the completion of Capital, for which he collected a mass of new material and studied a number of languages (Russian, for instance). However, ill-health prevented him from completing Capital.

His wife died on December 2, 1881, and on March 14, 1883, Marx passed away peacefully in his armchair. He lies buried next to his wife at Highgate Cemetery in London. Of Marx’s children some died in childhood in London, when the family were living in destitute circumstances. Three daughters married English and French socialists: Eleanor Aveling, Laura Lafargue and Jenny Longuet. The latter’s son is a member of the French Socialist Party.