COMMUNIST INTERNATIONAL NEWSPAPER: On the Recent Coup d’état in Sudan 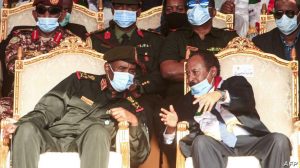 Abdel Fattah al-Burhan (left) and Abdalla Hamdok (right) at a meeting with a Yankee-Israeli delegation in Khartoum in 2020.

On the Recent Coup d’état in Sudan

On Thursday 25th of October, news surfaced of the arrest of Prime Minister Abdalla Hamdok and several other ministers in Sudan, as it became clear that the country had been the site of yet another coup. The leader of the putschists, army general Abdel Fattah al-Burhan, is the President of the Sovereignty Council, the transitional government that was established sometime after yet another coup he initiated, back in 2019. The coup marks the second coup attempt in Sudan in just a year, and the fourth successful coup this year in a continent that has so far seen 209 coups and coup attempts since 1955.

The Sudanese comprador regime, the native big bourgeoisie, are facing increasing pressure from all sides. The imperialists are pressuring them to implement rapid measures guided by the IMF, in return for predatory deals of “debt relief”. They are facing pressure from the armed struggle of certain “rebel groups”, and the attempts of restoration of the old regime of Omar al-Bashir through assasinations and coup attempts, with the latest coup attempt occurring just two months ago, on September 21st. They are facing the greatest pressure from the masses, the raging popular rebellion in the country. All the while, the floor is collapsing under their feet. Beucrocratic capitalism in Sudan is in the darkest depths of the deepest crisis.

Hamdok, being the reliable lackey he is, naturally listened to his imperialist masters as he implemented the program of economic reforms put forward by the IMF. Consisting of harsh austerity measures, this was yet another blow, in a series of blows to the living conditions of the masses in Sudan. Inflation continued to rapidly excel and soared to over 400%. The bread lines increased. Fuel prices almost doubled.

As if the anger of the masses was not fierce enough already, this would fuel their fury even more, as protests increased in quanity and quality. Seeing what was unfolding, the faction of the big bourgeoisie lead by Al-Burhan, grew increasingly dissatisfied with the other faction, seeing the popular rebellion of the masses as a more imminent threat and a more important matter to attend to at this moment, than the implementation of reforms to acquire debt relief.

The internal tensions started to reach a boiling point, as the security service imposed a travel ban on several officials belonging to the “civillian” faction. The sharpening of the internal contradictions constituted a definitive qualtiative leap as the contradiction turned antagonistic during October and the days leading up to the coup.

Following the coup, the putschists were widely condemned, inlcuding by Yankee imperialism. The EU, UN, African Union, etc. called for the immediate release of the imprisoned officials. The Yankees suspsended $700 million in aid to the regime, while the world bank suspended $2 billion.

Faced with the repercussions of the coup, it seems like Al-Burhan is succombing to the pressure and is walking back on his latest stunt. The two factions have in fact engaged in negotiations to form a new government that would include the reversal of the coup, with Al-Burhan promising Hamdok that he will be free to appoint the cabinet of his choice. In these negotiations, the faction represented by Hamdok is receiving direct orders from the Yankees. On November 16th, the Al-Burhan junta in fact permitted a Yankee “diplomat” to visit Hamdok to give directives¹, despite Hamdok being held in house arrest.

Bourgeois western media have made claims of an increased Russian involvement with the regime, particularly with members of the “military faction”. British-Canadian bourgeois news outlet Reuters reports that the putschists “obtained a “green light” from Moscow in an effort to protect themselves from any sanctions imposed through the United Nations Security Council, two official Sudanese sources said.”² Moreover, they claimed that General Mohamed Hamdan Dagalo has cultivated ties to the Russian imperialists.

Under the regime of al-Bashir, an agreement was made that approved the establishing of a Russian naval base in Sudanese territory, by the red sea. After being de facto suspended due to the chronic instability in the country since then, Chief of Staff of the Sudanese Army, Muhammad Othman Al-Hussein, announced in June of this year that the agreement had been renewed. Al-Burhan has reservations regarding the deal, but being the semi-colonial lackey that he is, pledged to honor “international agreements”.

The outsting of Hamdok, their trusted and reliable lackey, has surely irritated the Yankees and the other “western” imperialists. Al-Burhan, being the rabid dog he is, has once again proved his wild nature and portrayed himself as an incompetent lackey in the eyes of imperialism. As if novices acting in a play in a theater, the yankees have made unconvincing condemnations of the regime’s recently intensified repression of the masses. However, if the Al-Burhan regime is willing to compromise to the Yankees, they in due time surely will forgive this stunt and condone their seat at the table of comprador enrichment at the expense of the masses.

As we see again and again, the condemnations of the imperialists against the repression of the masses are hollow words. Moreover, the condemnation of repression, by the world’s sole hegemonic superpower, the principal enemy of the peoples of the world – Yankee imperialism – is even satirical. We know very well that while words of condemnation are cast across the table of “global diplomacy”, under the table the imperialists are shaking hands with the putschists and compradors. In fact, one could almost say that they make blood pacts, but instead of their own blood, their hands are covered in the blood of the masses.

For the background of the events unfolding in Sudan, see our article Imperialism and the Coup d´États in Africa.